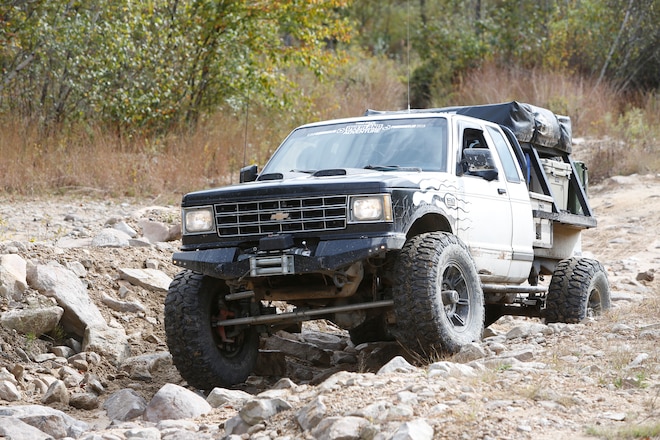 “Have I mentioned that there are no parts available for S-10s?” Taylor Wise asked that a... » Read More

To properly lift our 2008 Chevy Colorado, we opted for a Skyjacker 4-inch lift system, which... » Read More

If you’ve been reading Four Wheeler over the last year, you will recognize this 2001 Chevy... » Read More

The Interior Knobs, Buttons, and Switches for New Pickup Trucks on Four Wheeler of the Year #PTOTY20

If you are buying a new truck, you will want to check out all the new truck technology. It’s... » Read More

What is the 2021 Chevrolet Suburban and Tahoe Z71 Off-Road Package?

First Look at the All-New 2021 Chevrolet Suburban and Tahoe Top Ten Differences Between the 2020... » Read More

Top Ten Differences Between The 2020 and 2021 Chevrolet Tahoe

The 2021 Chevrolet Tahoe is bigger and bolder than ever before. After 25 years and four... » Read More

In a slightly unusual, but highly appreciated move, Chevy took a group of us out to the Milford... » Read More

After much waiting and anticipation, Chevrolet has finally pulled back the curtain on the... » Read More

This Vintage 1972 K5 Blazer Has All the Right Hardware

Square-body Blazers are commonly spotted on the trail, and for good reason. They came from the... » Read More

First Look: The Tech Details Behind the 2020 Silverado’s New 3.0L Duramax I-6 Turbodiesel

The last time Chevrolet offered a straight-six engine was in the ’08 Trailblazer. That... » Read More

We’ve been driving our long-term ’18 Chevy Colorado Crew Cab ZR2 for a year. Now we can now... » Read More

The early and middle 1960s brought some of the most iconic four-wheel-drive sport utilities... » Read More

This 2001 Silverado May Look Unassuming, But It’s Packed With Trail-Worthy Mods

Wheeling, and specifically rockcrawling, are most popular in Western states. With an abundance... » Read More

There is no mistaking the ZR2 for just a merely mortal, run-of-the-mill Chevy Colorado, and... » Read More

Chevrolet is adding a V-8 engine option to its 2020 Silverado models. Chevrolet will add an... » Read More

Bison In A Blizzard: Snowy Muddy Fun With The 2019 Chevy Colorado ZR2 Bison

Steady, driving rain was expected for the duration of the weekend, and it would turn into heavy... » Read More

For at least 100 years Chevrolet has produced quality, American-made vehicles including trucks, cars, and SUVs. The Chevy truck lineup includes the Colorado, Avalanche, and Silverado, all available in multiple trims. The Silverado is also available as a Hybrid.

Chevrolet started bringing vehicles to the United States in 1911. The Chevrolet Motor Car Company was founded by Louis Chevrolet, a Swedish racecar driver, and his partner, William C. Durrant who had founded General Motors two years earlier. Durrant and Chevrolet had worked together before when Durrant hired Chevrolet to race cars at promotional events for GM. Louis Chevrolet himself was largely responsible for the concept of many of the early cars produced by Chevrolet, although he would eventually sell his shares of the company that bears his name as early as 1915. In spite of Chevrolet's departure, Durrant went on to make the company an enormous success. In fact, by 1918 Durrant had regained control of GM (after being ousted years prior) and turned Chevrolet into its most successful division. By 1927 Chevrolet was even outselling Ford; a rivalry that has continued throughout the years.

The first Chevrolet pickup hit the market in 1948. Originally it was considered a vehicle for a farmer or tradesmen, but more and more families began to see the advantages of having a truck. The pickup truck received a restyling in 1967 to represent a new era. They were lower to the ground, but more durable than ever.

The Chevy pickup continued to evolve with the introduction of the C/K series (C indicating two-wheel drive and K indicating four-wheel drive). Chevrolet currently commands a large segment of the truck market through vehicles like the Colorado, Silverado and Avalanche. SUV trucks produced by the company include the popular Tahoe and the massive Suburban. Chevrolet also currently produces crossover vehicles such as the Equinox, Traverse, and Orlando.

The company was one of the first to standardize many one-time luxury features we now take for granted. Some examples include anti-lock brakes, safety glass, fuel injection, and stability control systems.

Chevrolet(Chevy) is also many great strides in eco-friendly options, starting with the Silverado Hybrid and flexfuel-capable vehicles that take E85 ethanol, a U.S.-grown grain fuel source.

Newer models offer Chevrolet MyLink which is an onboard collection of apps accessible via a touch-screen. Easily connect to Pandora, SiriusXM satellite radio, navigation apps, music, and more. The system is even compatible with smartphones and offers USB connectivity.

While Chevy's most iconic model is probably the Corvette, it more than made its mark in the world of American trucks as well.

The early Chevy trucks were cowl chassis units that likely came from the factory with only front sheet metal. Most owners at this time would buy a wooden cab and cargo box. It proved to be an effective delivery truck in the U.S. after World War I.

By 1930 the Chevy truck resembled more of a modern day truck with a traditional bed and enclosed cabin. These six-cylinder half-ton pickups became popular quickly and even earned the name "Cast Iron Wonder" for its rugged appearance.

In 1947 Chevrolet released its "Advance Design" trucks that answered consumers request for a roomier cabin and wider pickup box. The curved lines and attractive grille made the trucks even more popular than they were before. In the early 50s trucks began to be seen as a true alternative to a car.

The 1959 El Camino was marketed as a personal pickup, looking more like a long car than a truck. While this unique design did not take off on a mainstream level, it did enjoy a devoted following and continued to be produced through 1987.

The C/K models that we know today began in 1967. It offered car-like features inside, but retained the rugged look and powerful engine. Today the C/K models are known as the Chevy Silverado and it's available in a full range of powertrains from a 4.3-liter V-6 to a 6.20-liter, diesel V-8. The Chevy Colorado is the current midsize pickup offering and the stylish Avalanche is a light-duty pickup that can easily accommodate the whole family.