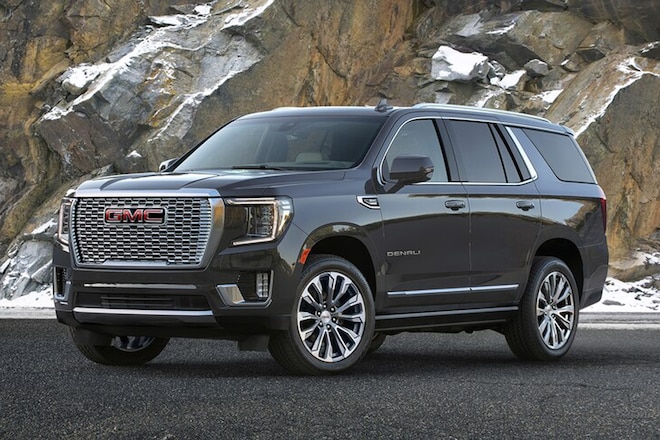 Chevrolet is happy to collect 80 grand or more from fiercely brand-loyal buyers looking for a... » Read More

Another Truck Gets the Harley-Davidson Treatment

The Interior Knobs, Buttons, and Switches for New Pickup Trucks on Four Wheeler of the Year #PTOTY20

If you are buying a new truck, you will want to check out all the new truck technology. It’s... » Read More

After a year of waiting, the advanced-construction GMC CarbonPro bed is ready for prime time,... » Read More

Episode 51 of The Truck Show Podcast: King of the Hammers

In this episode, we have Dave Cole from King of the Hammers and KJ Jones from Diesel Power.... » Read More

GMC showed off the 2020 Sierra HD in San Diego today, giving us sneak peek at the truck that... » Read More

Looking for a Half-Ton Truck? We Test Them All Head-to-Head!

Half ton trucks are more capable than ever, whether you want to tow or go off-road. We test the... » Read More

A GM insider leaked information about the upcoming 3.0L Duramax I-6 available in the 2019 GMC... » Read More

Colorado Climb 2018: Off-Roading in the Rockies with Eleven Trucks, SUVs, and Crossovers

We buy crossovers, SUVs, and pickups in part for the sense of ruggedness they impart, but can... » Read More

On Dirt Every Day Episode 79, join Fred and Dave as they resurrect an old van project... » Read More

General Motors (GMC) began in 1908 and was founded by William Durant as a holding company for Buick. In 1912 the GMC truck first appeared at an auto show and the GMC truck, which would spawn many different models, trims, and powertrains, was born. GMC and sibling company Chevrolet produce basically the same trucks and most of the historically GMC branded vehicles now carry the Chevrolet moniker.

GMC created some of the first commercial trucks back in the early 1900s and continues to be a force within the American truck industry today. GMC introduced the first truck to the public in 1912 and sold over 22,000 units. Throughout World War II, much like other auto manufacturers, GMC was a major provider of trucks for the United States military. Originally sold under the nameplate "GMC Truck," post-war trucks were simply sold under "GMC."

Over the years GMC and Chevrolet have walked in step, with most of their trucks being identical in body and even powertrain. The GMC Sierra is the brand's best-selling model and it has even outsold the Nissan Titan and Toyota Tundra. It has also sold various vehicles for commercial use including trucks, vans, and even buses.

As a company that has built trucks for over 100 years, GMC knows something about producing vehicles for the American market. With a focus on power, comfort, and fuel economy, GMC has made a name for itself starting with the first GMC Truck in 1912.

Throughout the 1970s and 80s GMC offered a line of light to medium-duty trucks including the Sprint, Caballero, S-15, the C-Series, and the Sierra (which is still in production). The GMC Sonoma is another light-duty GMC truck that was in production from 1991 to 2004.

GMC is probably best known for its line of heavy-duty Sierra trucks. This professional line of high-powered, working machines is the culmination of everything GMC has worked on for the last 100 years, setting the standard for power and fuel efficiency.

As one of the first trucks to be created, the GMC Truck was released in 1912. It was useful in a commercial capacity, but suited the average public as well.

From 1912 to 1917, GMC interestingly enough built some of the early electric trucks with a load capacity ranging from one-half-ton to 12 tons.

During World War II, GMC produced around 584,000 military vehicles, including the amphibious Duck.

The standard GMC truck received styling updates over the years to reflect the times. In the 30s, a sloped hood and rounded look eventually gave way to more defined lines in the 50s. Wood paneling and wood trim emerged in the 50s as well and stuck around through the 70s when GMC started making some more body style changes.

In 1989, the name Sierra was given to all of the GMC full-size trucks and they were differentiated based on hauling capabilities: 1500, 2500, and 3500. This naming convention has continued to be the standard.

Today GMC offers a midsize pickup called the GMC Canyon, as well as a full line of Sierra trucks. The Sierra 1500, 2500 HD, and 3500HD are available in an upgraded Denali trim. The 1500 is also available as a hybrid. As one of the few hybrid full-size trucks on the road, the 1500 Hybrid boasts 20/23 mpg city/highway.