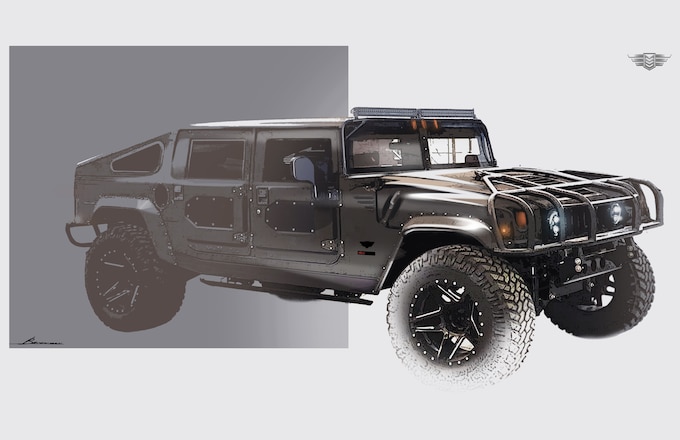 The result is one badass, ultra-luxurious, status-screaming SUV designed in Detroit and built in... » Read More

Behind the wheel of this incredible Hummer H1, no off-road trail is too treacherous, no... » Read More

Our Search For Higher-Capacity Wheels Leads Us To Hankook And GT... » Read More

Moab Utah Off Roading - Can Four-Wheeling Be Considered Work?

We head out to Moab, Utah for some off-road adventures with our Jeep JKs and take our Hummer H1... » Read More

The new 2006 Hummer H1 Alpha is definitely an improvement over the regular Hummer H1, with more... » Read More

Anyone in the 4x4 world knows of the H1 Hummer and its fine reputation for being extremely... » Read More

Hummer H1 Off Road - Hummers Off-Road! - Notes From The Dirt

Read about the Hummer H1 Off Road and follow the Hummer Club down the Bradshaw Trail - Off Road... » Read More

Read about the Hummer H1 Humvee that is light in armor designed especially for military use... » Read More

Read all about the US Government's custom built 2003 Hummer H1 K10 series, as they are among the... » Read More

2002 Hummer in Moab, Utah - Straight From The Jachmann - Off-Road

The Hummer brand is characterized as a big, military-type manufacturer that shamelessly boasts poor fuel economy and unreasonable extravagance. In other words, the H1 is a statement vehicle for those with the means to afford it – and the tolerance for frequent stops at the gas station.

The H1 has a very distinctive, boxy look, with many of the same overbearing accents you would find expect to find on a military vehicle. It is also known as an excellent off-road vehicle with large wheels and competent four-wheel drive.

The Hummer H1 is an off-road sport utility vehicle (SUV) that was built by AM General for the civilian market and based on the military M998 Humvee. During the Gulf War, the military Humvee had a lot of airtime on television news programs covering the war, which stimulated interest in the mainstream market. Two different models of the Hummer H1 were produced over the course of its lifespan, which ran from 1992 until 2006. When the Hummer H1 began production, it was the very first vehicle in the Hummer line.

The first models of the Hummer H1 were originally known as simply "the Hummer". The name was changed in 1999 due to a joint venture between AM General and General Motors (GM). This venture led to GM marketing the Hummer H2, which was based on a GMC chassis. At this point, the H1 designation was added to Hummers produced by AM General, in order to differentiate between the two vehicles.

The 2006 model of the Hummer H1 was the final model of the SUV. It went into production in 2005 and was discontinued in the spring of 2006. This model was significantly redesigned and was coined the Hummer H1 Alpha. The new version gained a 6.6-liter, turbo diesel, V-8 engine coupled with a five-speed automatic transmission, combining to produce 300 horsepower (hp) and 520 lb-ft of torque. Other modifications for the release of the Hummer H1 Alpha included a more powerful steering gear, the use of high-strength steel for the chassis, a new exhaust and electrical system, and a re-engineering of the fuel supply system. Overall, the changes led to a much more powerful Hummer H1.

The Hummer H1 is a huge vehicle. It weighs over 7,000 pounds, and is approximately 101 inches wide. When compared to most cars on the road, it is about three feet wider than compact cars, and weighs more than double the weight of a midsize car. They have a massive ground clearance of 16 inches, and are able to drive through up to 30 inches of water, as well as climb a step of up to 22 inches in height.

Additional features began to be added to the Hummer H1 starting in 1999 when the safety of it was improved due to the inclusion of anti-lock brakes and traction control. The inside of the Hummer H1 could never be described as comfortable, and the seats are surprisingly small, considering the size of the SUV. From 2000 to 2004, additional features were included in the interior and exterior, such as the option of adding a CD changer, and upgrading the wheels to 17-inch alloy wheels.

The first model of the Hummer H1 was produced from 1992 until 2004. It was released in several different versions, which were all equipped with the same body, but came with a range of tops. The most common of the four-door Hummer H1 models were a soft-top convertible model, a hard-top sport utility truck, and an Alpha wagon. A two-door pickup truck version was also produced, but it was mainly used by the military and equipped with military weapon-launchers, or used to transport troops or cargo. A four-door version with a slant-back and a body much closer to the Humvee was also used by the U.S. military.

While it is fairly difficult to gauge what year a Hummer H1 was produced solely from outward appearance, the 1996 to 2005 versions were significantly different from the earlier models in terms of powertrain. For the 1996 model, a 6.5-liter, diesel V-8 engine replaced the 6.2-liter engine. The increase in engine size provided a corresponding increase in horsepower, up to 170 hp from the 150 hp found in earlier models. The transmission was also modified to a four-speed automatic transmission.