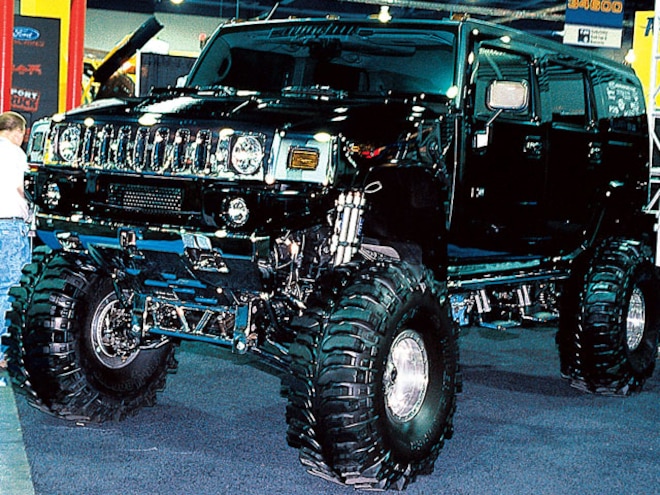 The Hummer H2 was created in response to the perceived popularity of the HUMVEE, the High Mobility MultiPurpose Vehicle created for military use. The strengths of this vehicle initially gave rise to the Hummer H1 in 1992, but being very close to the military vehicle which inspired it, the H1 was not perceived as being very convenient for civilian use. To address this, in 2003, General Motors created the Hummer H2, a slimmer version of the H1 suitable for use by everyday families as a Sport Utility Vehicle or Sport Utility Truck. Due to its high price and poor fuel economy at time when the nation began moving towards more fuel-efficient, more economical vehicles, the Hummer H2 was discontinued in 2009.

The 2009 Hummer H2, which was its final model, suffered from the fact that it wasn't really designed for the city streets for which it was marketed. It could be a challenge to drive for those who were not experienced with such large vehicles, as its height and width created blind spot and turning problems comparable to those experienced by full size trucks. Maneuvering through dense traffic in this behemoth was almost out of the question.

On the other hand, driving the Hummer H2 off road provided an experience like no other. This tank of an SUV/SUT laughed at even the toughest terrain. The H2 couldn't be stopped by large rocks, mud, snow or just about anything else nature could throw at it, thanks to its serious ground clearance, armored underbody and big, tough wheels.

For a vehicle of this size, space was not as ample as one would expect from an SUV. The SUT version had the pickup bed for cargo, but the standard model did not have an overwhelming amount of cargo space and featured limited rear headroom, which was no doubt disappointing considering the problems with parking and maneuvering caused by the Hummer H2's overall size.

There was one base model for the 2009 Hummer H2 but two options packages, the Adventure Package and the Luxury Package. The Adventure Package added some useful off-road accessories like a self-leveling rear air suspension and a front brush guard, along with camping necessities like a tool kit, first aid kit, and lamp. For those looking to dominate city streets with their Hummer H2, the Luxury Package provided 20 inch chrome wheels along with real time traffic navigation, rear view camera, chrome accented exterior and advanced audio and entertainment options.

The Hummer H2 has a composite body style, which combines a GM2500 series frame, a GM1500 series, and a unique frame joining them. While there was only one generation of Hummer H2, it did go through some permutations over the years. The most significant of these may have been the addition of the H2 SUT, or Sport Utility Truck, in 2005, which took the traditional H2 SUV body and giving it a pickup bed, effectively combining a full-size Sport Utility Vehicle with a pickup truck. This was also the year that Hummer drivers could opt to add a DVD based navigation system.

The first Hummer H2 SUV in 2003 featured a 6.0-liter, V-8 engine which delivered 316 horsepower and 360 lb-ft of torque. This engine was mated to a four-speed automatic transmission. In 2008, the next to last model year, the powertrain was upgraded to a 6.2-liter V-8 that offered 393 horsepower linked to a six-speed automatic transmission. The Hummer H2 interior also received an upgrade, with higher grade interior materials, more comfortable seats and a more user friendly gauge and electronics interface set up.

In 2009, the final year of production, the Hummer H2 received some more changes to the interior. Owners could add captain's chairs for the second row and fold away the third row seats to maximize cargo capacity. Other features new to the 2009 version included Bluetooth, OnStar navigation and a Flex-Fuel engine that was equipped for E85 fuel. A special Black Chrome limited edition H2 was available for this final model year. H2 owners could also find new features like a heated tilt steering wheel with power steering and a new rearview camera.