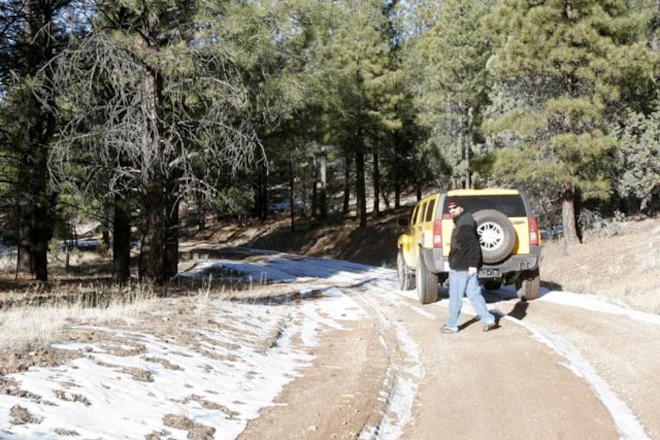 The Hummer H3 was considered a "real world" Hummer. Hummer H1s and Hummer H2s were great for the wealthy and celebrities to show off with, but weren't very useful in typical driving situations. The Hummer H3 carried on the Hummer style without dominating the road or stressing out drivers who weren't used to handling a large, truck-sized vehicle.

The origins of the Hummer H3 can be found in the military HUMVEE, the High Mobility MultiPurpose Vehicle used to great effect by the armed forces. A campaign by interested parties led General Motors to consider the viability of the HUMVEE for civilian, urban use, which led to the rolling out of the Hummer H1 in 1992.

Unfortunately, the Hummer H1 was a little too similar to the large military truck for most urban and suburban drivers, so a smaller, wieldier version, the Hummer H2, was introduced in 2003. However, sales of the H2 dropped rapidly, as, while the Hummer H2 was great for off-road adventure, its large size and poor fuel economy, especially relative to its limited interior space and comfort, made it less than popular with those day-to-day drivers that GM was trying to court. Thus, GM unveiled its final attempt, the Hummer H3, in 2005. This Sport Utility Vehicle, or Sport Utility Truck for those who purchased the H3T, which incorporated a pickup truck bed, was much more similar in shape and tone to traditional mid-size SUVs, which remain hugely popular. While the H3 allowed the Hummer to reach a larger segment of the population, its addition to the line was not enough to save the brand, and the entire Hummer line was discontinued as of 2010.

The all-wheel-drive Hummer H3, the predecessor to the H1 and H2, was the first of all three models to successfully combine superb off-roading abilities with the comfort and maneuverability of popular SUV. While the H3 fit five people, its cargo space was not comparable to other vehicles in its class, making it a less popular choice among families. Interior features and creature comforts, power, and towing capacity were some of the H3's strongest suits.

One unique feature of the Hummer H3 was its two phase all-wheel drive system. The system electronically adjusted depending on what was needed for either off-road driving or standard driving conditions. As a Hummer, the H3 was well suited for almost any conditions, and could function in shallow depths of water and traverse significant vertical grades.

The base model of the 2010 Hummer H3 SUV could seat five, with a cargo capacity of 25 cubic feet with all seats in place and a maximum cargo capacity of 62.8 cubic feet The all-wheel drive H3 came with a 3.7-liter, five-cylinder engine linked to a five-speed manual transmission and generated 239 horsepower with 241 lb-ft of torque. It had a maximum towing capacity of 4500 lbs. and a maximum payload of 1312 lbs. Comfort and convenience features included an eight-way power driver seat with power lumbar support, power locks, mirrors, steering and windows, cruise control, a tilt steering wheel, six-speaker AM/FM and CD stereo with XM satellite radio, Bluetooth and OnStar.

The popular Alpha edition came with a 5.3-liter V-8 engine linked to a four-speed automatic transmission. This engine generated 300 horsepower with 320 lb-ft of torque, and had a maximum towing capacity of 6000 lbs. with a maximum payload of 1161 lbs. This model got about 13/16 mpg city/highway. Additional features on the Alpha included multi-level seat heating for driver and passenger, eight-way power adjustable seating and lumbar support for both leather bucket front seats, seven speakers with Monsoon premium brand speakers and a subwoofer and chrome alloy wheels.

Additional trims like the Luxury or Adventure models, and packages like the Off Road suspension package as well as single add-on options such as power sun roof rear seat entertainment center, were also available.

As the last entry into General Motors line of consumer-friendly Hummers, only one generation of Hummer H3s were produced. That being said, there were some changes over the five year lifespan of the Hummer H3. In 2007, GM improved its power train, from the original 3.5-liter five-cylinder engine that generated only 220 horsepower to a 3.7-liter engine that bumped that up a few notches to 239 horses. This was still not an engine that could stand up to the size and bulk of the Hummer H3, so in 2008, the Alpha H3 emerged, which featured a much more appropriate 5.3-liter V-8 that generated a healthy 300 horsepower. All-wheel drive was always standard on the H3, as was a five-speed manual transmission, although with the new Alpha engine a four-speed automatic transmission was standard.