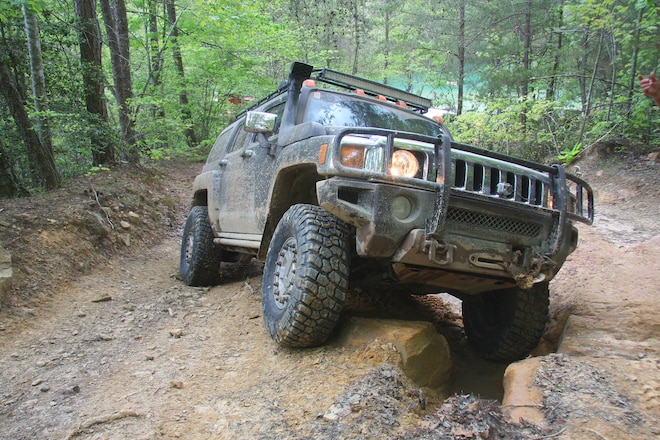 The third line to follow the Hummer legacy consisted of the H3 models produced by General Motors... » Read More

The trip begins in the Piedmont Plateau region of Georgia just east of Atlanta. We set our... » Read More

The Most Competent Bunch Ever?... » Read More

An Early Introduction To The Hummer H3T... » Read More

Hummer is a truly unique automobile manufacturer, offering recognizable vehicles defined by their combination of rugged luxury and unparalleled off-road driving capabilities. The H3T was introduced in response to demands from the buyers' market to fill a prominent void in the automotive world – demands for a dependable midsize truck that could handle itself off the road, without compromising original styling and luxurious interior options. At the time, most midsize trucks drove very well on the road, but were seriously inadequate for off-road adventures. While it was intended to provide a balance between the two, the H3T actually ended up overcompensating: it was a great off-road vehicle, but offered relatively poor handling when driving on-road, due to its stiff handling and insufficient fuel economy.

The Hummer H3T is a H3 model Hummer with a five foot truck bed. It is larger than a midsize pickup truck, even though some classify it as such. It was debuted in 2004 at the Los Angeles Auto Show as a two-door concept truck, and later as a five-passenger four-door crew-cab at the 2008 Chicago Auto Show. The H3T was offered in several trim levels, including the standard H3T, the H3T adventure, the H3T luxury, and the H3T Alpha, which gave the option of cloth or leather trim packages.

The H3T was short-lived for two very specific reasons: the economy and rising fuel prices. The Hummer brand had become synonymous with wealth and excess during the financial crisis of 2007, and as gasoline prices nearly doubled in most states, the Hummer's dismal fuel economy contributed to this image of superfluous extravagance. Hummer's exorbitant reputation did not help its sales figures, and, in 2010, General Motors ended the entire Hummer brand.

The 2010 Hummer H3T was a midsize pickup truck produced by General Motors' Hummer division. The H3T was equipped with a 3.7-liter LLR engine that produced 239 horsepower and 241 lb-ft of torque, with the option of a 5.3-liter LH8 V-8 engine that produced 300 horsepower and 320 lb-ft of torque. The fuel economy for the LLR engine was 14/18 mpg city/highway and the LH8 was 13/16 mpg city/highway. The LLR inline-style engine featured variable valve timing on the exhaust side, an electronic throttle body, and a special oil pan with a pass-through for the front wheel drive shaft.

The H3T had two choices of transmission: a standard five-speed manual, and a Hydra-Matic 4L60-E four-speed automatic transmission. The manual transmission could tow up to 3,000 pounds, whereas the automatic transmission could tow upwards of 4,500 with the LLR engine and 6,000 pounds with the LH8 engine. The H3T had a two-speed, electronically-controlled, full-time four-wheel-drive system that ensured optimal driving conditions for both on-road and off-road driving. There was also an option for locking front and rear differentials. With a high ground clearance of 9.7 inches, the H3T could drive 5 miles per hour in 24 inches of water and 20 miles per hour in 16 inches of water.

The H3T had several safety options that increased driver and passenger security, such as an electronic stability control, anti-lock four-wheel disc brakes, brake-controlled traction control, and a tire pressure monitoring system. The Insurance Institute for Highway Safety rated the H3T as Acceptable for frontal offset and side-impact crashes, but Poor for rear-crash protection.

The H3T was based off of the popular H3 design, which was a smaller, more fuel efficient version of the H2 model. The H3T featured a five-passenger crew-cab and a separate five-foot long bed. The H3T was not as large as a full-size truck, but not as small as a midsize truck, therefore making it the only kind in its class. The H3T developed a reputation as the more luxurious model offered by Hummer – one that gave all the comforts and amenities for the everyday driver as well as all the means required to take the vehicle off-road. The H3T was presented as the perfect option for those who need a fairly fuel-efficient car for weekday driving but a capable machine for weekend off-roading.

There were some additional features that made the H3T different from any other truck in its class. It was the only midsize truck to offer full-time, off-road, four-wheel drive, large 32-inch tires, and multi-functional skid plates. It also featured the option of locking front and rear differentials, larger 33-inch tires, and a big 5.3-liter, V-8 engine.

The H3T was only in production for two years, selling approximately 5000 units in the U.S. from 2009 to 2010. The 2009 model was essentially the same as the 2010 model, offering both the 3.7-liter LLR engine that produced 239 horsepower and 241 lb-ft of torque, and the 5.3-liter LH8 V-8 engine that produced 300 horsepower and 320 lb-ft of torque. The fuel economy of the 3.7-liter engine was 14/18 mpg city/highway, and the 5.3-liter engine offered 13/16 mpg city/highway. The bed of the truck featured an integrated bedliner and a built-in cargo storage unit. A full-size spare tire was mounted underneath the truck, along with four underbody skid plates. The H3T also featured driver, passenger, and side-curtain airbags with a rollover sensor for enhanced safety.