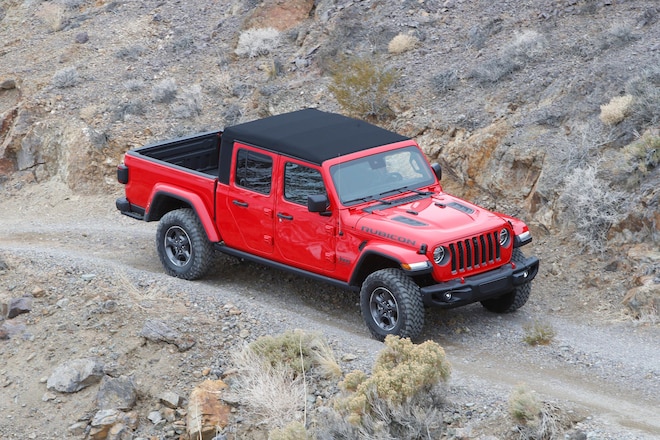 Jeep Gladiator is Four Wheeler’s 2020 Pickup Truck Of The Year!

Jeep Gladiator is Four Wheeler’s 2020 Pickup Truck Of The Year!

Loose and floppy steering is not an uncommon problem in Jeep Comanches (MJ) and Cherokees (XJ),... » Read More

Aden Ethridge and his budget build 2003 Jeep Wrangler TJ were one of 100 guests with us during... » Read More

We first caught a glimpse of Kansas Sartin’s 1980 AMC Jeep CJ-5 weaving its way through the... » Read More

Jeep is getting serious about electrification, and it now vows to offer an electrified—read:... » Read More

How to Bleed Brakes on a Jeep Using DIY Tools

Your Jeep’s brake system is more important than the engine. The engine will make it go, but... » Read More

2012 Jeep “Gladiator” with an LS Engine: A Different Spin on the Gladiator Pickup

Everyone is talking about the new Jeep JT Gladiator, and with good reason. Not only is it new,... » Read More

Disjointed U-Joint U-joints are used on drivelines and front axleshafts in order to transfer... » Read More

The four-door Wrangler Unlimited has been a smash hit from the day it entered the marketplace as... » Read More

Every year the off-road and automotive performance industry gathers for the biggest trade show... » Read More

There are many different levels of Jeep dedication, from the guys that restore old flatfenders... » Read More

Heat is the enemy of any and all automatic transmission. We’ve been told that anything over... » Read More

When it comes to early Jeep iron, the Tuxedo Park Mark IV is very special. It was a new and... » Read More

One of the easiest bolt-on modifications you can make to any Jeep CJ-7 is a suspension lift kit,... » Read More

Jeep is an American auto manufacturer that specializes in off-road vehicles. Through the years, it has released compact, midsize, and full-size sport utility vehicles (SUVs) as well as a few trucks. Jeep stopped production on its last truck, the Jeep Comanche, in 1992.

Jeep has been around since the 1940s and was acquired by the Chrysler Corporation in 1987. Jeep worked closely with the United States military, especially during World War II. In fact, the original Jeep vehicle was a light four-wheel drive vehicle that was used in the war and for post-war efforts. Since then Jeep has released to the public many off-road and sport utility vehicles (SUVs).

The name Jeep has a military background as well. The military designation for the first Jeep vehicle was "GP" (or General Purpose). GP was slurred enough times and eventually morphed into "Jeep." In fact, the military actually defines the word Jeep as a four-wheel drive vehicle used for reconnaissance or other army duty. Jeep has continued to have an all-purpose, off-road distinction which is still seen in its models today.

Jeep hasn't produced a truck in a few decades, although there's always rumors that they will do so again. The first truck-like vehicle was the four-wheel drive Willys Jeep Truck which was produced from 1947 to 1965. Jeep's early, full-size pickup was originally produced by Willys-Overland and Ford for the United States Army.

A few more trucks were added to the lineup through the 60s, 70s, and 80s, including the Gladiator, Honcho, and finally the Comanche; all with limited success. Jeep decided to phase out production of the Comanche and get out of the truck business altogether in 1992 after lackluster sales and brand conflicts with Chrysler's other brand Dodge. Dodge would take over selling trucks and Jeep would continue with only SUVs.

The signature feature that Jeep continued to improve on was its 4x4 capabilities. The Comanche also sported Jeeps new "Quadra-Link" suspension with coil springs and upper and lower control arms. The improved suspension provided a more comfortable ride and improved axle articulation during off-road trips.

The first truck that Jeep released was the Willys Jeep Truck that hit the market in 1946. It was a full size, iconic truck. In the 60s and 70s Jeep also offered the Gladiator. The Honcho ran through the late 80s. In 1956 Jeep all put out a midsize pickup, the Forward Control, followed by the CJ-10 and then the Comanche. In fact, the Jeep Comanche was the last truck offered by Jeep. This compact pickup truck had two doors and was available with rear-wheel drive or four-wheel drive. Its body, styling, engineering, and drivetrain were based on the Cherokee XJ, and this model was produced from 1985 to 1992. After the Comanche, Jeep decided to stick to what it does best - produce rugged, off-road Jeep vehicles.