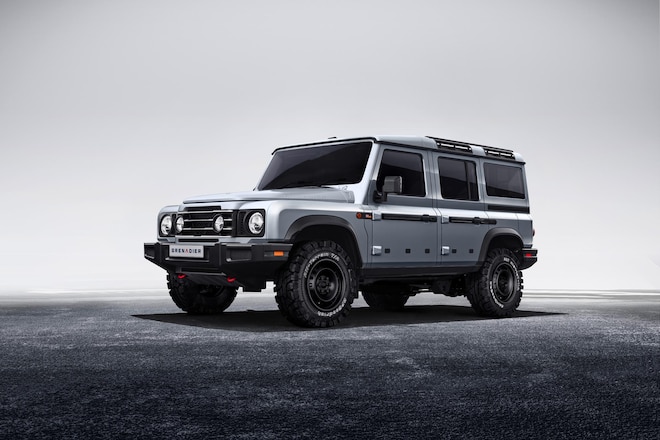 Ineos Grenadier: The Origins When Land Rover ended production of the original Defender in 2016,... » Read More

Land Rovers: You either “get them” or you don’t. Who doesn’t love a British-built... » Read More

When we were first introduced to the all-new Range Rover Velar in 2018, we were immediately... » Read More

Four Wheeler’s 2020 SUV of the Year is the hard-core, weeklong shootout where we determine the... » Read More

The 2020 Range Rover Sport HSE P360 might have been the only vehicle in our SUV of the Year test... » Read More

The sun was still well below the horizon when the morning alarm blared, tearing our intrepid... » Read More

There were no promises of perfect weather, clean socks, or anything remotely easy. The year was... » Read More

While overlanding is all the rage at the moment, its origins lie in English gentlemen crossing... » Read More

We can’t recall a time when we had a more love/hate relationship with a long-term test... » Read More

Discovering the middle ground of expectations versus reality with our 2018 Land Rover Discovery... » Read More

The replacement for the legendary and long-running Land Rover Defender is right around the... » Read More

Getting all our 2018 Discovery’s problems out of the way in one fell update.... » Read More

Land Rovers are a rare site in the rocks, but it is more than just looks that make this 109... » Read More

First report: Getting acquainted with our seven-seat off-roader... » Read More

The Most Capable Defender on the Planet?... » Read More

Land Rover began in 1947 and is one of the oldest four-wheel-drive brands (alongside Jeep). After World War II, Land Rover noticed a need for a dual-purpose vehicle that could be used in rural areas for farming and chores, as well as regular transportation. Now days, Land Rover is known as a company that produces very capable vehicles with a touch of luxury.

Land Rover is a company that has bounced around between owners quite a bit over the years. This British company originally used "Land Rover" as the name of one vehicle model made by the Rover Company from 1948 to 1967, but it eventually became the overall brand for a whole line of vehicles.

In 1967 the company was absorbed by the British Leyland Motor Corporation. In 1988 the British Leyland Motor Corporation went under and the Land Rover piece became part of the Rover Group which was eventually absorbed by BMW in 1994. In 2000, BMW broke up the Rover Group and sold Land Rover to Ford Motor Company. Then, as an ever-changing pawn in the difficult world of the American automobile industry, Land Rover was again sold to Tata Motors along with Jaguar Cars.

The first vehicle produced by Land Rover was the Land Rover as part of the Rover brand in 1947 after World War II. Also called the Land Rover Series I, this was an off-road utility vehicle that was suitable for agricultural use as well as getting around town. The Series I had a 1.6-liter, four-wheel drive with a two-speed manual transmission. Its successor, the Series II had four-doors and a slightly larger 2.0-liter engine with a four-speed manual transmission.

Land Rover has a more refined look now. It is likely used much less for off roading and farming chores than it is for looking good at junior's soccer game. The lineup of relatively high-priced vehicles includes the LR2, FR4, Range Rover, Range Rover Sport, and the Range Rover Evoque which was named the "2012 North American Truck of the Year."

From the inception of the utility vehicle, Land Rover has always considered itself at the forefront of automotive innovation. Today this is evidenced by the new Electric Defender models that retain performance will producing zero emissions. This four-wheel-drive model has a 300-volt, lithium-ion battery with a range of more than 50 miles and it can go up to eight hours before recharging. Land Rover also experiments with biofuel compatibility as well as an electric rear axle drive which could increase the top speed of its electric models.

Land Rover also has other clever features unique to its vehicles such as ambient interior lighting that changes according to Terrain Response settings, as well as a vehicle data display that appears as a floating three-dimensional LCD display for the driver. The rear seats fold up and down with the help of an electric motor and some models even offer a storage area specifically designed for the front tire of a bike to assist in transporting it inside the vehicle.

From 1947 to 1985, Rover Company developed the Land Rover in several different models, called Series I, II, and III. The British Military used a large number of these vehicles including the British Army, Royal Air Force, and Royal Navy.

The Series models eventually evolved into the current lineup of Land Rovers, which are the Defender, Freelander, Discovery, Range Rover, Range Rover Sport, and Range Rover Evoque. In the United States the Freelander 2 is called the Land Rover LR2 and the Discovery 4 is called the Land Rover LR4. The Defender series was launched in the U.S. in 1993 and was the first time since 1974 that Land Rover had sold a utility vehicle in America. These Land Rovers had to be seriously modified to meet the stringent regulations of the United States Department of Transportation. The U.S. Defender series was in production until 1998 when regulations regarding air bags halted production due to the fact that adding air bags would mean a major modification. Only small numbers of these vehicles had been sold, so it was determined that the modification was not economically viable. As such, the Defender is no longer sold in America.

Land Rover recently debuted the first all-aluminum Range Rover and the Freelander was the first to offer Hill Descent Control.