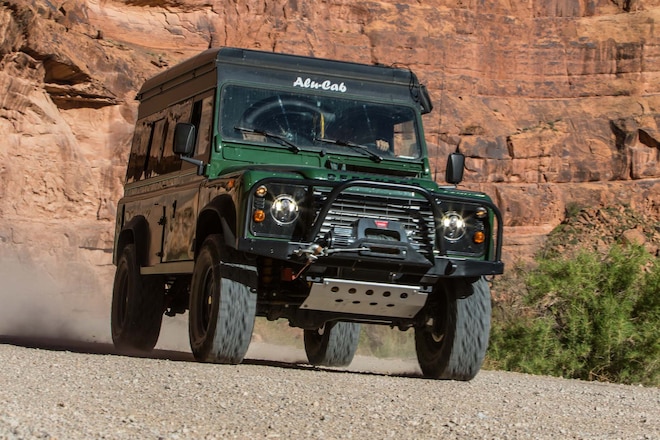 While overlanding is all the rage at the moment, its origins lie in English gentlemen crossing... » Read More

The replacement for the legendary and long-running Land Rover Defender is right around the... » Read More

The Most Capable Defender on the Planet?... » Read More

Land Rover will reportedly produce a pickup variant of the 2020 Defender, giving the company a... » Read More

Get Schooled and Go Wheeling With Expert Drivers... » Read More

If someone told you to imagine an expedition crossing a desert in a far-off land you’d... » Read More

Two-Letter Defender: An LS-Powered Land Rover that goes as good as it looks

New vs. Old: Which Is Right for You?

The editor of 4-Wheel & Off-Road shares his opinions on old 4x4 trucks vs. new and which are... » Read More

Why You Really Want a Land Rover Defender 110

We take a Land Rover Defender 110 to the Overland Expo and have a really good impression about... » Read More

Built For More Than A Safari... » Read More

Carey Steiner's 1995 Rover D90 is built for the trail with just the off-road essentials.... » Read More

The Land Rover Defender is known by many off-road experts to be one of the best all-wheel drive off-road vehicles one can own, and is also well-known, like the Series Land Rovers before it, to be easily repaired due to its simplicity of design relative to many other vehicles.

OriginsIn 1948, a British car manufacturer made history by introducing the Land Rover, a hearty, off-road vehicle that offered serious competition to America's Jeeps. The original Land Rover Series 1, and then the Series 2, 2a, 2b and 3 were increasingly popular, if not always as street vehicles, then for purposes such as farm work, heavy lifting, adventure safaris, and emergency vehicles. As the Land Rover Series began to become outdated, ultimately ending production in 1985, a new Land Rover was called for. This new Land Rover started in 1983, as the Land Rover 90 or the Land Rover 110, depending on the size of the wheelbase. In 1985, an additional Land Rover with an even larger wheelbase, the 127, was introduced. In 1989, Land Rover produced a new vehicle known as the Land Rover Discovery. In order to clearly differentiate between the Discovery and the Land Rover 90, 110 and 127, these models were badged as Land Rover Defender.AboutThe 2013 Land Rover Defender bears a strong resemblance to Defenders of years past, while still exemplifying some modern styling. This model features a 2.2-liter diesel engine controlled by ventilated disc brakes. The engine provides 120 horsepower with 265 lb-ft of torque. Linked to a six-speed manual transmission, the 2013 Defender can get up to 90 mph and goes from 0 to 60 in just under 15 seconds.Features

The 2013 Defender comes with additional exterior color options as well as luxury features like new entertainment options and seat design.

Other option packages on the 2013 Land Rover Defender include an Off-Road package which features antilock brakes, a tow ball, off-road wheels and tires and an underbody protection bar, a Leather Package which adds leather to the seats and steering wheel, an Exterior Package which adds more upscale exterior features like side runners and a body colored roof, and a Comfort Package featuring comfort and convenience options like air conditioning and CD player.

These Land Rovers were available in a variety of body styles, including three or five-door station wagon, three-door van, or two-door pickup. The all-wheel drive Land Rovers were linked to a five-speed manual transmission, and were available with a variety of engines, starting with a 2.25-liter four-cylinder that provided 75 horsepower and a 2.25-liter, Diesel engine that offered 62 horsepower. Later models featured a 2.5-liter four-cylinder with 83 horses, a 2.5-liter diesel with 68 hp, a 2.5-liter TurboDiesel four-cylinder that delivered 85 horses, and a 3.5-liter V-8 that generated 113 horsepower. Starting in 1986, the V-8 was powered up to provide 134 horses.

In 1990, production strategy necessitated a change in the badging of the Land Rover. The new Land Rover Discovery required a way to clearly distinguish different types of Land Rovers, and so the original Land Rover 90, 110 and 127 became the Land Rover Defender. The Defender comes as a three-door or five-door station wagon, a two-door single cab or four-door double cab pickup or a two-door hard top. Available transmissions have included a five-speed manual, six-speed manual, and four-speed automatic.

Most notable about the Land Rover Defender was its more powerful engine. Making Land Rovers powerful enough to achieve high speeds quickly and easily maintain them was always an issue for Land Rover, and the new TurboDiesel direct injection engines helped greatly in this area. The most attractive of these TDI engines is probably the 2.5-liter five-cylinder TDI, which provides 122 horses. A powerful V-8 engine is also available, a 3.9-liter engine that delivers 182 horsepower.

After 1997, new United States safety regulations, specifically with respect to airbags and impact testing, were implemented which would have required a redesign of the Land Rover Defender. The company determined that the changes required were not cost-effective relative to their share of the U.S. market, and so discontinued production of the Land Rover Defender in the United States.