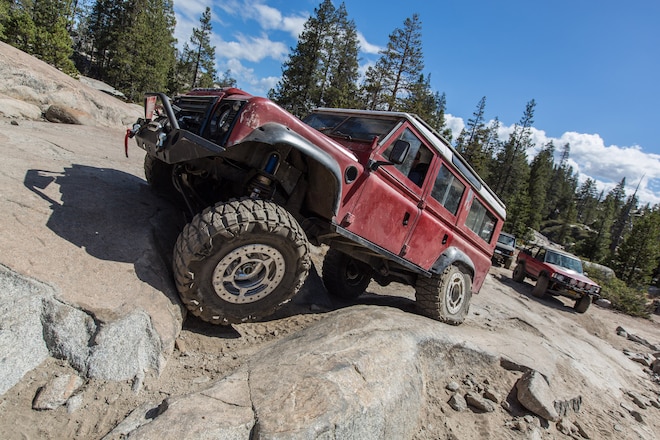 Land Rovers are a rare site in the rocks, but it is more than just looks that make this 109... » Read More

New vs. Old: Which Is Right for You?

The editor of 4-Wheel & Off-Road shares his opinions on old 4x4 trucks vs. new and which are... » Read More

September 2008 Letters to the Editor

From our Archives - With state-of-the-smart 4WD and 400 horses underhood, what's not to like?... » Read More

The new 2006 Land Rover Range Rover is the original "luxury-utility" vehicle and has always... » Read More

Read about the Range Rover Classic as they trail along areas of the Tillamook State Forest. - 4... » Read More

Read about the 2006 Range Rover Sport along with the Toyota Tacoma Off Road challenges. - 4... » Read More

Read about the Rover Accessories available for your jeep and explore a portion of Death Valley's... » Read More

The Land Rover Range Rover is known for being the flagship vehicle of the Land Rover group, a full-size SUV that is larger than the original Land Rover and with far more of an eye towards luxury. The Range Rover, now in production for over 40 years, has become so distinguished that it is now not just a model, but a brand unto itself.

The 2013 Land Rover Range Rover lives up to the Range Rover name. What that means is strong off-road functionality, a powerful engine an upscale interior and a smooth ride. It also means a high price tag and questionable reliability.

There is only one model of 2013 Range Rover, but you can get it with a 5.0-liter, Supercharged, V-8 engine linked to an eight-speed, shiftable automatic, as opposed to the base 5.0-liter V-8 without the supercharger. The 2013 all-wheel drive Land Rover Range Rover seats five and gets 14/20 mpg city/highway.

This Range Rover not only works with the unibody platform as opposed to some permutation of the ladder box chassis, but the platform is all-aluminum instead of steel, meaning a more lightweight body and more performance form the engine, in addition to better fuel economy than previous models and easier handling.

This all-new Range Rover has fresh, more modern exterior styling, with a softer, more aerodynamic, more streamlined look. The adaptive Terrain Response system is more comprehensive than ever, and the retuned suspension helps ensure a smooth ride even when taking corners at higher speeds. The interior has plenty of comfort features and an overall luxurious look and feel, including extra leg room for the rear passengers.

Despite the fact that current Range Rovers are luxury vehicles with upscale exteriors and interiors, the original Range Rover that first appeared in 1970 was not at all designed to be a luxury vehicle. The Range Rover was designed with a body on frame chassis, similar to the existing Land Rovers but distinct from later Land Rover models which would make use of a unibody construction. The unibody construction would be used on the third generation Range Rovers. The original Range Rover featured a 3.5-liter, V-8 engine which produced 155 horsepower, but over the years other engines were made available, including a 3.9-liter, V-8 that generated 182 horsepower, a 4.2-liter V-8 that offered 200 horsepower and a 2.5-liter, TurboDiesel engine. When this generation of Range Rover began to overlap with the next one, which started production in 1994, this Range Rover took on the name "Range Rover Classic." The first Range Rovers were available as five-door or five-door SUVs.

The next generation of Range Rover was developed under the auspices of now-owner BMW, which means this Range Rover was more easily scaled up with the inclusion of BMW systems and parts. The five-door Range Rover third generation came with a five-speed automatic, six-speed automatic or eight-speed automatic transmission and offered a variety of engines, including a 4.4-liter, BMW V-8; a 4.4-liter Jaguar V-8; a 4.2-liter, Supercharged V-8; a 5.0-liter, Supercharged V-8, and several TurboDiesel engines, a 2.9-liter six-cylinder TD, a 3.6-liter V-8 TD and a 4.4-liter V-8 TD. The standard 5.0-liter V-8 on late model Range Rovers provided a healthy 375 horsepower with 375 lb-ft of torque. This model had a maximum towing capacity of 7716 lbs. and a maximum payload of 1290 lbs., with a maximum cargo capacity of 74.1 cu. ft., 35.1 cu. ft. with all the seats in place.