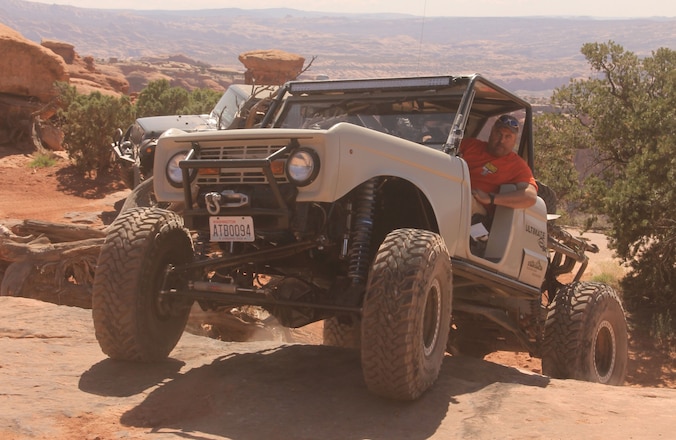 Every year as Easter approaches our heart beats begin to quicken. Not at the promise of delicious and copious quantities of chocolate bunnies, eggs, and sugary jelly beans from the Easter Bunny’s impending visit (although we do love sweets). Not because of religious resurrection, although our passion for off-road is fundamental and its rebirth during spring is without doubt a time of joy for us and all its followers. The real reason for our palpitations and excitement towards the end of March and into April is the anticipation of the annual trip to the off-road Mecca, Moab, Utah, for the Easter Jeep Safari put on by the Red Rock 4-Wheelers. The draw of EJS and Moab is undeniable in the heart of the devoted off-road faithful. Its presence can be felt in the brisk spring air . . . and on the internet as friends and colleagues begin to chat about their plans and epic journeys. We at Petersen’s 4-Wheel & Off-Road work with an extra sense of urgency, finishing stories early and prepping vehicles for our journey to our off-road holy land.

The draw for EJS 2015 in Moab was no different than years past. Not only would we get to see old friends and make new ones, but Moab is also the off-road industry’s favorite time to show off new products and projects. Highlights that build anticipation leading up to EJS are Jeep’s annual concept vehicle reveal, when we and the off-road public get a chance to look inside the design studios of one of our favorite vehicular brands. As if that weren’t enough, the manufacturer’s new products show Thursday and Friday of the week before Easter tempts us with the newest and hottest off-road goodies. Held in the Spanish Trails Arena, this show gives us, the media, and you, the public, a chance to see what’s in the pipeline for the aftermarket.

Can you identify the model of this Jeep creeping up Moab Rim Trail? Do you recognize it from somewhere in the past? This Jeep is owned by none other than Chris Durham. He used to drive this rig (a modified CJ-10 airport tug) in rockcrawling competitions from the late ’90s and into the ’00s and won quite a few events in the days before full tube rock buggies. Durham resurrected the CJ-10 after it got a few years rest from his heavy-throttle-style driving.

Another recent trend we’ve noticed that we love is when retro and old-school 4x4 rigs assemble in the streets and on the trails of Moab. This is a trend being followed by enthusiasts, OEMs (like Jeep), and from within the off-road aftermarket. This gives many of us a chance to see vehicles that are rare or unique in an environment where they are doing what they do best. This includes an unofficial flatfender trail run (actually the second annual unofficial Moab/EJS flattie run), which this year occupies a trail known as the Pickle. We spotted in and around town one Mahindra Jeep (our own Rick Péwé’s recent DED acquisition, written about in “The Red Hornet Rides Again,” May ’15), a Mitsubishi J3 being offered for sale, a passel of other flatfenders, Daystar’s amazing FC, a few FSJs, and a Perkins Diesel–powered CJ-6, just to name a few of the retro wheelers running trails in Moab.

We just about forgot the largest draw of Moab and EJS: the amazing topography, geology, and off-road trails for all to enjoy. Trails range from gravel roads you could do in a 2WD vehicle on up to extreme off-road trails where big tires, lockers, winches, and no fear of body damage are a must. There is something for everyone to enjoy. If you’ve never been, you owe it to yourself to go. If you did go, or couldn’t get away, know that there is always next year—and it will be a big one since 2016 is the 50th Easter Jeep Safari and the 75th anniversary of the Jeep brand.

Riding up Moab Rim Trail we bumped into Mike Kim and his awesome golden JK flexing just uphill from the Colorado River. Kim was Cooper Rasmussen’s co-driver from Ultimate Adventure 2014. He is quiet and reserved, but he has built one hell of a JK that works well without looking like every other JK out there. Ginsu is the Jeep’s name, and she is sharp. The Wrangler is a 2014 with the 3.6L and an auto transmission. A Dynatrac Pro Rock 44 front and a factory rear 44 housings spin Nitro chromoly 35-spline axles and ARB Air Lockers. Tires are 38-inch Falken Wild Peak MTs, and that flexy suspension combines Synergy suspension parts with Off Road Power Products proprietary springs on Fox bypass shocks. The Jeep rides great on-road and off.

We dig the gray paint and different body lines on this tricked-out TJ. Or is it a CJ? Maybe a YJ? The grille is all TJ, but the cowl and windshield are from an older rig. We also spy air struts and 1-ton axles.

If you’ve been paying attention you know we have a soft spot for 4x4 vans. That shouldn’t be a surprise. After all, who doesn’t want a capable 4x4 van? With Ford phasing out the E-series vans (as of 2014), the Ford Transit is poised to take over. Quigley 4x4 Conversions, one of the pioneers of quality 4x4 van conversions, has three prototype 4x4 Transits around the country. One Transit just happened to be playing around on the red rocks of Moab during EJS. Dear Quigley, we’ll take all three if available. Thanks, 4WOR staff.
Photo courtesy of Quigley 4x4 Conversions

Hells Gate is one obstacle on Hell’s Revenge that is bound to get your pulse up. If you follow the right line the climb is pretty easy, but go too far one way and you’ll end up on your side. Go too far the other way and you may end up going over a time or two. Kraski Gochev knows the line to take and makes short work of the climb in his simple yet effective 1998 four-banger TJ.

You never know who you might bump into out on the trails in Moab during EJS. Ned Bacon is an off-road legend to longtime readers of 4WOR and Four Wheeler, and his yellow and black flattie, known as the Killer Bee, is almost as famous (or should we say “infamous”?). Bacon has raced the Bee in old-school rockcrawling competitions and even the Mexican NORRA 1000. Behind him is Pat Gremillion of Premier Power Welders and Pull Pall land anchors. Gremillion is a nice guy who is willing to help almost anyone in need on the trail.

We caught up with Jim McGean from Dynatrac out on Kane Creek. He was out testing new aluminum axle parts that piqued our interest. That front axle has an aluminum centersection and aluminum knuckles. Also in the works are aluminum wheel hubs and other parts. We’re guessing Dynatrac might be dabbling in lightweight metals to help with OEM mileage standards.

The Quadratec BBQ is held every year at the Moab High School. Good food and a Jeep show? We’re in. There were many cool rigs in attendance, but one of the coolest had to be Mitchell Carter’s 1966 CJ-6. OK, CJ-6s are always cool. Early CJ-6s are even cooler, but what makes this 6 a unicorn is the powerplant. This is one of a few surviving CJs that came from the factory with a Perkins Diesel between the framerails. Carter not only has a nice collector 4x4, but he also wheels the Jeep and works for ARB.

“Gather round, all yee” as General Ricardo Péwé, fearless leader of the Ultimate Adventure and world-renowned Jeep nut (and our boss), lectures on his unique CJ-3b/Mahindra mail Jeep. Hope you brought your waders!

Off-roaders gather at trail heads, road sides, and various locations around the small town of Moab. Here a couple of good-looking flatties wait while their owners get ready to participate in the second annual unofficial EJS flattie run. There is also the Full-Size Invasion for those of you who like to do it in larger rigs. Wonder what groupings next year’s EJS will inspire.

Ultimate Adventure 2014 invited reader Matt Bokan either is taking a nap under his tractor or looking for flattie parts before crashing the unofficial flattie trail run. Even exclusive and unofficial trail rides will allow nonconforming rigs to follow the group. Intermixing of nonconforming vehicles is just not OK.

So it’s called Easter Jeep Safari, but that does not mean that you have to drive a Jeep. On Moab Rim Trail we saw this Tacoma set up with parts from Warn and ARB.

Our buddy Mike recently finished his CJ-2A after owning it for about 18 years. The end result is pretty stunning and retro cool. The flattie is powered by a healthy 4.1L Buick V-6. The transmission is a venerable GM SM420 bolted to a Spicer 18 with a Warn overdrive. The front axle is a narrow track Dana 30 with an e-locker. Out back, one-piece axleshafts and a Detroit locker reside in an early Dana 44.