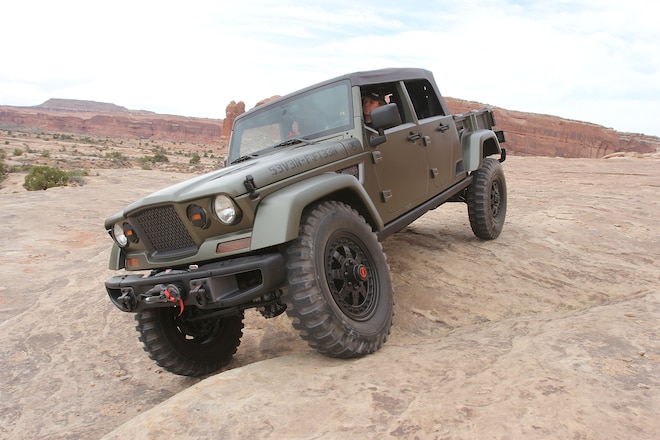 The Jeep Crew Chief 715 was one of seven concept vehicles that Jeep and Mopar unveiled here in Moab, Utah, at the 2016 Easter Jeep Safari, and we were there with cameras blazing! The Crew Chief 715 is a cool truck that is a salute to legendary Jeep military service vehicles.

Here you can see exclusive photos, a video, and our thoughts on the Crew Chief 715. Yeah, we have opinions, and you can read ‘em below. Make sure to check out all the exclusive content on the other Jeep concept vehicles here at fourwheeler.com!

Fred Williams, editor, 4-Wheel & Off-Road Magazine: The Crew Chief 715 quickly earned the named Crew-Kiser after the similar M715-esque concept truck Jeep brought to Moab a few years back. The large four-door cab, and extra-long wheelbase must be pointing directly at a possible future Wrangler-based truck, but there were subtle upgrades that we wonder if they will make it to a future Jeep, such as onboard air compressor, lightweight perforated steel bed, and the much higher beltline half doors. I wonder if the half doors may be pointing at a future Wrangler that doesn’t use different half and full doors, but rather use a full door that when the window is down results in a better half door? Maybe without any upper glass frame? The cut out step behind the rear door for access to the bed or roof also seems handy for a future truck. Though I doubt there will be such a military looking body on a future Jeep truck, I wouldn’t be surprised if a Wrangler-based truck had its own unique front sheetmetal.

Christian Hazel, editor, Four Wheeler Magazine: It kind of reminds me of a fullsize pickup truck chassis, but it’s not. To me the wheel and tire combo is somewhat reminiscent of swamp buggy tall and skinnies. I think not putting a 3.0L EcoDiesel in this thing was a missed opportunity, but on the other hand – look at it. It’s the Jeep pickup everybody has been clamoring for come to life.

Ken Brubaker, senior editor, Four Wheeler Magazine: Personally, this truck contains all the cool functional features that I want (including four doors), and it has a cool military look. Needs a diesel, but other than that, its fine the way it is. Love the unique, but functional bed.

Harry Wagner, contributor, Four Wheeler Network: Like a four-door Nukizer. It has the wheelbase of a school bus but I liked that it had an air compressor on it and the perforated metal bed was cool. The half doors were much higher than the normal half doors (like the Trailcat had). This gives the appearance of a lowered roof line, which we have also seen on past concepts like the Flattop.