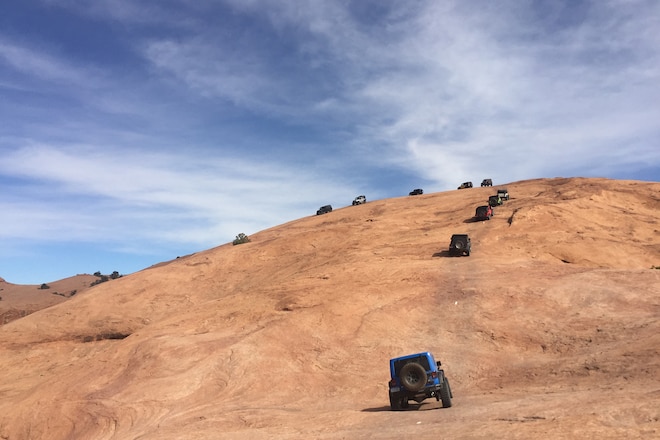 Never been to the Red Rock 4-Wheelers Easter Jeep Safari? You aren’t alone. While thousands of people have participated and enjoyed the red rocks of Moab, Utah, there are plenty more of you jeepers that never have. However even the old timers among us may question the title of this report- as you won’t find the Three Stooges trail on any map!

The Three Stooges is actually a combination of the Poison Spider Mesa, Golden Spike, and Gold Bar Rim trials that snake along the upper plateau northwest of Moab. The stooges moniker comes from the fact that while there are indeed three trails, it takes a lot of motivation and maneuvering to make all three trails in one day. We went with a hardy group of Jeep engineers (yes they do exist and go jeeping) who took some of their newly minted compadres out for a day to show them what it’s really like to go wheeling.

The trail starts on Poison Spider Mesa, which is full of obstacles and options along the route. About half way through it’s easy to take the Golden Spike, as that’s where the famous Golden Crack and Double Whammy reside. This is also how the route intersects the Gold Bar Rim trail, which leads you across the slickrock and around to the wash back home. Always busy during the EJS, it’s best to wait till the following week for an easier cruise. Make sure you are locked both ends and on at least 33’s, or you may be out for quite some time. Night runs and recoveries are common on any section of the trail.