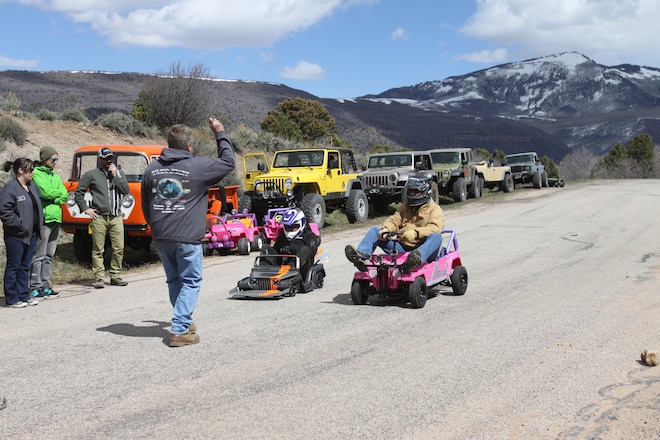 What happens when the staff of the Four Wheeler Network gets wind of a clandestine invite-only Jeep race outside of Moab during the Easter Jeep Safari? Well, we pack up our cameras and get going!

Besides, real men don’t need no stinkin’ motors. Or transfer cases. They’ll race anything for a bar bet when pride and elbow skin is on the line, especially when their manhood is challenged by a bunch of guys from Detroit who are used to getting their lunch money taken by just about anyone with a pulse. Once the gauntlet was dropped and competitors called out, it didn’t really matter what they’d be racing -- it only mattered that they’d be racing. This time it just so happened to be girly pink Barbie Jeeps in Moab. Now we’re talking!

To our amusement, parked on the apron were near-stock Barbie Jeeps with upgraded steering and bearings, as well as an unlimited class that saw racers employing frames, wings, advanced suspensions, and pneumatic tires. Each Jeep incorporated a well thought-out solution to the same problem: how to take a plastic kid’s Jeep and make it stiff enough for a corn-fed adult and go fast enough to beat a soapbox racer in downhill race. With speeds approaching 30 mph in the unlimited class, the Jeeps had to be engineered to keep their parts together and their driver’s alive to see another day at the track.

While there were plenty of heats of lesser vehicles, the real marquee showdown in the Barbie Jeep Invitational was between Mark “The Guy From Detroit” Allen and Jim “El Grande Jeffe” McGean, each supported by a large team of Barbie Jeep loving enthusiasts. With plenty of putdowns and comebacks over the last several months, it was time for these two teams to leave their iPhones behind and settle the challenge in a proper forum: a 1/8-mile winding mountain racecourse.

As race time approached, the air was thick with pent-up anticipation, each racer eyeing the other for an advantage -- or a weakness. Poker faces, full-faced helmets, and a little bit of moxie were donned in preparation of the impending start. After some grunting and jawing between drivers and teams that can only be described as antagonistic, assigning lanes was done with a proper game of Ro sham bo. It was decided that each racer would get a four-foot push with a Street Outlaws-style start and that the race would go to whoever crossed the finish line first. The two opposing teams settled on a best-of-three format, the winner achieving their destined glory, taking home the highly coveted Gravity Cup, and earning uncontested bragging rights for a full year. The stakes have never been higher in the world of Barbie Jeep racing, as they were on this day and time at EJS 2016.

Instead of giving away the ending, we’ll let you watch the video to see the epic battle unfold with hot Barbie Jeep downhill racing action. See for yourself!