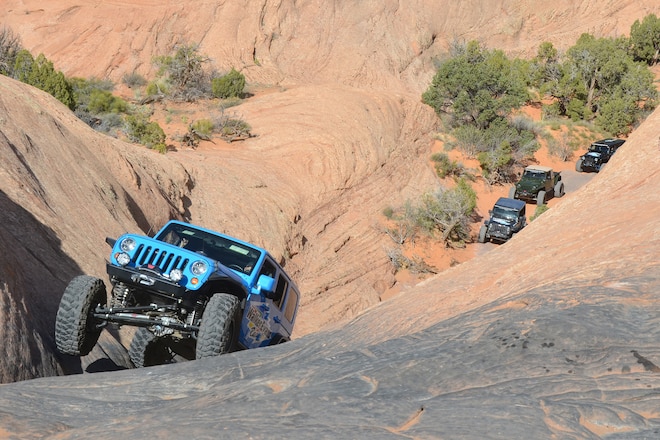 Ah Moab, you are like an old wheeling buddy who knows more about everything than we do. You know about good times, challenges, pain, getting stuck, breaking down, love, happiness, and driving flawless lines. You teach us about your amazing geology and beautiful nature and allow us to breathe in cool mountain air, all while getting our tires in the dirt. We love you like family, and we wouldn’t know what to do without you. Happy birthday!

Easter Jeep Safari in Moab, hosted by the Red Rock 4Wheelers, turned 50 years old in March 2016. The milestone was celebrated with many friends from around the country and all over the world. Jeep, Toyota, Chevy, Dodge, Nissan, Ford, IH, Mercedes, Rover, and more, along with their people, were all in attendance to celebrate off-roading in the red rocks of southeastern Utah. You couldn’t keep us away for love or money. With hundreds (if not thousands) of miles of trails to explore, there’s always more to be seen.

If you’ve never been to Moab, go. The Easter Jeep Safari (EJS) makes for a great time to be there, with tons of cool stuff to see, but we have yet to find a time of year when Moab isn’t enjoyable (although the small town does slow down in the winter, and it does snow). Many trails are packed or access restricted during EJS. The wheeling is always good, but the weather can be unpredictable, and once you’ve gotten a lot of wheeling in there are tons of other activities to explore, from rock climbing to river rafting to museums that teach about the history of the area. Sitting here writing this, we want to gather all our friends and family to rush back to Moab. Real life prevents that, but you can bet we’ll be back as soon as we can. For more Moab related content check out all the articles, vehicle reviews, and features, trail reports, videos, and more at fourwheeler.com/moab-experience/2016/.

Day 1 in Moab for Easter Jeep Safari 2016 we hit Strike Ravine with a whole group of friends. Corby Philips has been on many Ultimate Adventures, but his recently assembled 2013 JK Unlimited has not . . . yet. He bought the Sahara after it had been wrecked, and he rebuilt it into what you see here. The Jeep now has ARB Air Lockers, 5.13 gears, a Currie Dana 44 with Spintech hub conversion and Warn locking hubs, a Currie Dana 60 rear, a 3-inch Rancho long arm suspension, Raceline wheels, and 37-inch BFG Krawlers.

Strike Ravine is a great day trail with fun obstacles, beautiful vistas, and a few old mines to explore. The trail is south of town near Area BFE. For a full report on the trail as of March 2016 check out Strike Ravine Trail Report.

After Strike Ravine we had a bit more time to kill so we grouped up with some well-equipped rigs for a quick run up Heldorado in Area BFE. This trail is tough and almost guaranteed to leave a mark on your rig. For more images and a quick video of Heldorado check out Heldorado Trail Report.

Our second day in Moab for EJS 50 was spent on Steel Bender. This is a great trail that starts near Moab’s golf course and comes out of the rocks close to Ken’s Lake.

Steel Bender is another longish trail with lots of fun obstacles. The trail is rather tough, but a skilled driver can do it in a stock Jeep. It is best to go with someone who knows the trail. In our group was none other than Kevin Stearns in his UA 2015–tested, 5.3L-powered Chevy Crawlerado. We dig this truck—especially since Stearns trimmed the fenders more to clear the new beadlocks and 40s.

Ned and Kat Bacon made the trail in their pristine column-shift 1946 CJ-2A. This early civilian Jeep is rare and beautiful. Bacon wheels it pretty hard but is careful to protect the early example of a Civilian jeep from anything too damaging.

The most feared obstacle on Steel Bender is a steep drop into an off-camber left turn. This obstacle, known as The Fall, brings the pucker factor way up. The bypass is not much better because it requires you to descend several off-camber smaller steps just to the left of The Fall. Check out the video of a few rigs going down The Fall for an idea of what to expect.

Chris Durham is no stranger to Moab, Jeeps, or our fine magazine and Ultimate Adventures. His newest creation is a low-rider 2010 two-door JK. The Jeep rolls on 38-inch Falken tires, but the roof line is several inches below that of a stock two-door JK. With Durham behind the wheel, it traverses many difficult obstacles. Here the roadster (as we called it) makes short work of The Witches Step on Steel Bender. We shot a feature on Chris’ JK which can be seen at 2010 Jeep JK - The Roadster.

Hells Revenge is the most iconic trail in Moab. Just up the hill from town in the Sand Flats recreation fee area, this is one trail that is a Moab must. The trail traverses miles of slick rock and has lots of optional obstacles (some of which are quite difficult). The feeling of following the steep climbs on Hells Revenge is something that is next to impossible to duplicate in a wheeled vehicle anywhere in the world.

Hells Revenge is a great trail to hit with a few close friends like Keith Bailey and Sam Gillis, UA cronies. Somehow these two guys from Alabama commandeered our two-headed JK. Bailey drove the front front while Gillis piloted the back front.

Hells Gate is one of the first optional hard obstacles on Hells Revenge. It is very close to the Colorado River Overlook, which is worth a look. Hells Gate is intimidating, but if you straddle the crack all the way up, you can do it in a stock 4x4 with low range. If you get off line near the bottom you will slide down into the crack and it feels like you’re going to flop on your side, but you probably won’t. If you turn left too early at the top, the climb can end in disaster. Here none other than Walker Evans shows the correct line near the top.

The hot tubs on Hells Revenge are fun to play in. One is easy in almost any 4x4, but Mickey’s Hot Tub and especially The Car Wash require skilled driving lockers and more. It is easy to break, flop, or both in the latter two hot tubs.

According to legend, Potato Salad Hill got its name when a cooler in the back of a vehicle trying to climb the hill chucked the potato salad. This short yet steep hill is a difficult climb unless you know the line and have the wheelbase. It does make for spectacular rolls and is a great area for spectaters (see what we did there?) as the week of EJS continues. You can drive to Potato Salad Hill in any car.

On Day Umpteenth of Easter Jeep Safari 50 we had forgotten what day it was. Together with some friends we hit Pritchet Canyon, one of Moab’s toughest. This is one hard trail that has lots of hard climbs and big rocks that want your rig to roll or break. Obstacles include Chewy Hill, Suicide Hill, Rock Stacker, and Yellow Hill. If you want to run Pritchett during EJS, be patient. Bring spares for things that might break or bend, driving skill, tools, and a winch. Oh, and be ready to use all of the above.

If Pritchet Canyon is too easy for your rig you need to head out to Area BFE. A non-fee private off-road park that accepts donations has tons of hard trails and big climbs for you to test out serious rockcrawling equipment. Kelly Ludwig was on hand in his ever-evolving and cleanly built 1997 ZR2 S-10. Keep an eye peeled for a full feature on the homebuilt truck.

Towards the end of our EJS 50 stay, on the Friday before Easter, we tagged along on the unofficial Friday Flatfender Fun Run running a trail known as Backwards Bill. We love any and all vintage 4x4s, so getting to see lots of flatties at once was awesome. Patina and NDT tires make for a great match.

The one and true obstacle on Backwards Bill is a steep climb called Wipeout Hill. It has two lines, with the one to the left being the harder line. This subtly modified military flattie looks the part but is tricky. For example, the soft top bows are structural and act as a rollbar in an emergency.

Of course, the line to the right is nothing to be sneezed at. Several stockish flatties did make this steep climb despite original parts that many have given up. All of these trails were cut using vintage iron like this.

Did we mention that several stock flatties were on hand? You may recognize Ned and Kat Bacon’s early CJ-2A (second red flattie from the left). The green 2A to the right of that Jeep belongs to Eric Filar and has a ton of period-correct trinkets, including an asbestos-lined cooler, an aluminum half-cab, and some tires that should have been abandoned 30 years ago. Getting to see this many flatties at once is one of the amazing things that make Moab a must-go event.