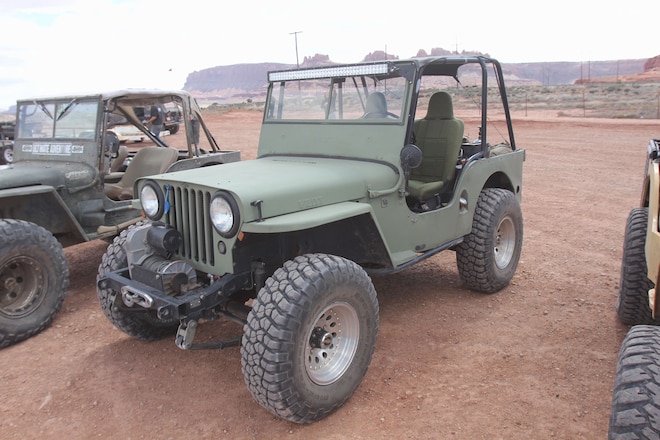 Four years ago during a magazine feature shoot in Moab we noticed that we had an accidental all flatfender trail run with whopping three flatties. That might have been the first unofficial EJS in Moab flatfender run. It was fun to have vintage Jeeps on the trail so we talked about doing it again. The next year more people talked about getting together before hand and about 9 flatties met up and ran a trail. The next year (last year) we talked about doing it again and 14 flatties made the unofficial run. This year the run grew by huge leaps and bounds and when all was said and done 44 flatties showed. That’s a large number of flatties, and even though we devided it into two groups (those who could do over 50 mph, and those that can’t) means we’ll probably have to make the Friday Flattie Fun Run official next year. Our friend (and UA alumni) Brennan Metcalf, is a bit of a flattie nut, and he was on the first unofficial run and has organized (if that’s possible) the subsequent runs. For that we say thanks, and look forward to next year’s run. Now, we could wax poetic about how the flatfender is 75 years old and EJS is 50 and how that made a super cool vintage run possible, but instead we’re just going to bombard you with pictures of the trail ride.