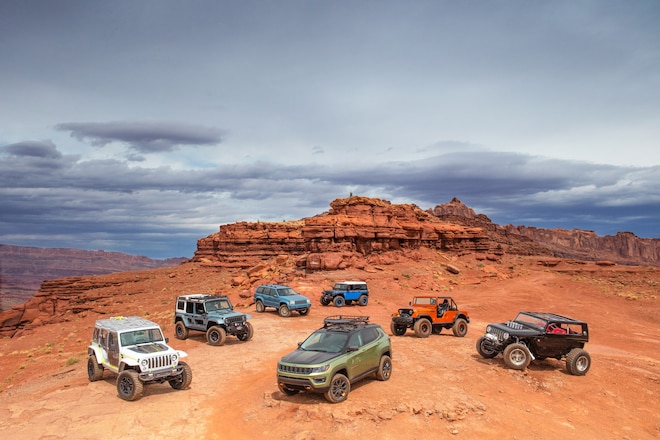 Lots of us struggle every year to get our Jeeps ready for the Moab Easter Jeep Safari, so it’s nice to know that Jeep corporate folks are also slinging wrenches to get there. As you may know, Jeep considers Moab its second home and likes to show up with a group of cool concept Jeeps every year. This is Jeep and Mopar’s chance to show off new products, hint at future products, and go wild with really cool designs just to see if it can do it.

This year, once again, the designers and builders at Jeep and Mopar delivered some unique vehicles. Plus, with the imminent reveal of the next Jeep Wrangler we were especially interested in whether some of these Jeeps would hint at what the future holds. The variety of fun and futurism gave us many things to think about.

The Quicksand concept is a big dune toy. If it reminds you of a 1970s model car or Hot Wheels toy, then you know what the design team was going for. This Jeep has a rowdy loud Mopar 392 crate engine but with cutouts to reduce the noise if desired. The engine is followed by a six-speed Getrag manual, and Dana 44 front and Dana 60 rear axles. The gears are matched to the tires: 4.56s up front with 32-inch BFGs, and 5.13s in the rear with 37s. The windshield and top are chopped and the wheelbase stretched. There is a winch hidden in the fake front Moon fuel tank. This Jeep is an example of the team building something wild and fun. One thing we especially noticed is the unusual grille, with the bent outer slots near the headlights. Could this be a hint of a future Wrangler grille? We hope so.

The Jeep Mopar Luminator concept is a fresh take on the lighting options for a Jeep Wrangler. Everyone knows we are being overrun with light bar options. Though some are awesome, many are lame-duck, low-buck copies. The Luminator is a mixture of new technology and ideas. Our favorite amongst them are the light bars that mount inside the Jeep behind the windshield. This eliminates the annoying wind noise of so many light bars. The lights do block some visibility, but we see them only getting smaller and better integrated. We would love to see this option on a fullsize truck application with a big windshield. There are other lighting upgrades as well, with bright reverse lights, headlights, bumper lights, rock lights, cowl lights, and a hood mounted light that is engineered to pinpoint a moving object in front of the Jeep and illuminate it, such as wildlife running across the road. In addition to the lights, the Luminator has a solar panel on the roof to keep batteries charged.

The Jeep Mopar Switchback is a showcase of both production and prototype products from Mopar for Jeep Wranglers. The hardtop with safari-style roof windows, and the half-doors with cutouts, are still in the prototype stage, but we really like the possibility for both of these for additional visibility of scenery and trail obstacles. Plus they allow more in-cabin daylight. The top also has an integrated roof rack. The Jeep also has a Mopar 4-inch lift with remote reservoir shocks, 37-inch tires, a PowerDome hood concept, and Katzkin leather seats. The black wheels with machined accents are also prototypes, but we are over that look. It seems overdone these days. The overall look of the switchback is clean and gives the JK a safari-ready feel.

When Mopar wants to build a resto-mod Jeep to showcase its new Hemi V-8 crate engine, the CJ-66 is the result. We picture this 1966 Jeep CJ-6 living at a Colorado mountain cabin whose owners like to explore the dirt roads and high trails but also want something cool to take into town for dinner that can stand out amongst the Range Rovers and G-Wagons of Vail and Telluride. This CJ-6 has an awesome copper color and drives solid like a new Jeep, which is unusual for ratty old Jeep owners like us but simultaneously oddly appealing. The 5.7L Hemi V-8 crate and Mopar Dana 44 axles all are attached to a Jeep TJ chassis that has been modified to fit under the CJ-6 body. We don’t love the seats—they look out of place—but the rest of the build really works for us, including the chopped windshield and the Mopar beadlocks.

Most of our 4-Wheel & Off-Road readers would never think of a Jeep Compass as a starting point for a trail machine, but the Jeep TrailPass concept shows that even a cute-ute can be built to do more than just drive for a latte and a Pilates class. This compass has a 1.5-inch custom lift, slightly taller 29.5-inch tires, and some Jeep Performance Parts rock rails. Those are three upgrades we’d recommend for just about any little wheeler. After that, most of the upgrades are aesthetic, such as leather seats, hood decals, and floor mats. The TrailPass does have a variety of roof racks and storage cargo trays, all making the vehicle more useful for car camping and mountain exploring. If Jeep is looking for a way to lure buyers away from Subaru, this concept should prove to be good bait.

Can you believe that the Grand Cherokee model has been around for 25 years? Jeep celebrated by bringing an original 1993 ZJ out to Moab, christened the Grand One, but with a few tricks to make it even better. The wheelbase was stretched 3 inches, the tires boosted up to 33s, and the axles replaced with Mopar Dana 44s. The lower rocker panels were replaced with steel that looked identical but was thicker to act as rock sliders. The entire Jeep was disassembled, cleaned, repaired, and rebuilt to pay homage to the whole Grand Cherokee line. Then the Jeep guys hid all sorts of 1990 flashback tchotchkes and stickers to celebrate when the Grand was born. There’s even an old car phone mounted inside. The Grand One concept is amazing in that the Jeep is so small inside and out. The current Wrangler Unlimited and Grands have grown up, but this granddaddy Grand was actually the same size as an XJ Cherokee. We love the rumble of the old 5.2L V-8 and the ever-so-subtle wood paneling wrap that lives on the sides of this Jeep. And then there’s the Sport N Wood badge. So appropriate.

The Jeep Safari concept has some really exciting ideas for making a Wrangler Unlimited even more family friendly for off-roading. The goal was to open up the outdoor experience to the rear passengers, and this was done in a variety of interesting ways. The first thing you notice is the translucent roof that showers the occupants with sunlight. Also, the rear seats are canted slightly toward the door openings for an easier view of the outdoors. Those thin aluminum-framed doors are cloaked in transparent plastic to make them almost disappear, giving the occupants plenty of views even in inclement weather or during long dusty days. We like the lack of a major B-pillar because we always thought the JK B-pillar looked funky, but the Safari uses rearward-opening rear doors (aka suicide doors), and we’re not sure about that. This Jeep also had the same grille as the Quicksand, reinforcing our theory that this may be a grille of a future Jeep. We also like the boat-sided bodywork, something that should be implemented in production Jeeps. The multitude of windows and open-air feel of the Safari, even with a full top and doors, really makes this concept a winner.
PhotosView Slideshow