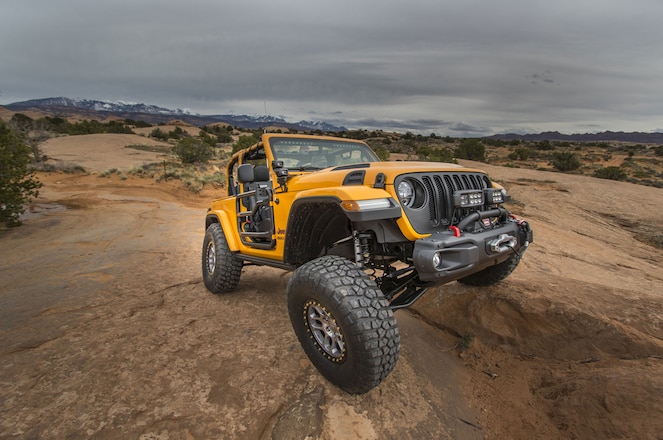 Nacho Jeep is a rolling showcase of some of the Mopar brand’s Jeep Performance Parts (JPP) menu, designed to show how you can modify your rig. The color on this JL, Nacho Yellow, is rare. The turbocharged 2.0L Nacho has a Rubicon bumper with Warn winch, a slew of LED lights that were inspired by the Luminator concept, a 2-inch lift kit with 2.5-inch aluminum body shocks, 37-inch tires, beadlock-capable 17-inch wheels, rock rails, 2-inch-diameter tube doors, spare tire tailgate hinge reinforcement, JPP fuel door, and black Katzkin leather seats with Jeep logo, and much more.

Here you can see a collection of detailed photos, exclusive video, and our opinions on the Nacho. Make sure to check out the other concepts that Jeep and Mopar brought to the 2018 Easter Jeep Safari here at fourwheeler.com!

Ken Brubaker, editor, Four Wheeler: I thought this little JL was really cool. It was nimble on the trail and it looked good. I was in a vehicle behind Nacho heading out to the trail before sunrise and the aftermarket LED lighting was utterly amazing. I thought it was cool that Mopar built this rig using a two-door and the 2.0L turbo engine. Very unique. Thumbs up from me, but I’d prefer a more muted color. Like olive drab. But then it wouldn’t be called Nacho.

Christian Hazel, editor, 4-Wheel & Off-Road: LED lights inside the windshield? I don’t really think I’m about that, but I’m sure some would get all gooey inside at the prospect. However, the other Mopar accessories adorned to this little two-door JL are right in step with hard-core off-road use, from the stubby Mopar winch bumper, true beadlock wheels, super-solid tube doors, tailgate-mounted tray, and even to the rear backup CHMSL-mounted LED light. The Nacho was as capable as it was nacho-colored.

Sean Holman, content director of Truck & Off-Road Group, The Enthusiast Network: There is a joke in here somewhere about this not being your JL, but in my maturity and advancing age I will refrain from stating the obvious. What isn’t obvious (unless the bright neon cheese–colored paint is a tell) is the amount of sheer lumens this thing puts out. “JL” might as well mean “Just Lights,” because despite all the Mopar goodies, it’s the cool lights that make this Jeep stand out, especially in the dark. These are “Nacho” typical lightbars. Okay, I couldn’t resist.

Rick Péwé, editor, Jp Magazine: Aftermarket accessories for the booming Jeep Wrangler market have always been a big money-making machine. But now with the introduction of the new JL Wrangler, the Jeep Performance Parts division of Mopar had a leg up in bringing the first accessories to market for the new Jeep. The yellow Nacho concept is brimming with cool offerings from JPP, including a slew of LED lights, tube doors, and of course, suspension, tires, and wheels. It only makes sense for Mopar to lead the bandwagon rather than jump on it—and show the JL customers that their local dealer is a one-stop marketplace for all of their wants and needs. Need a winch and bumper? Check. Katzkin seat covers? Check. Rock rails? Check. Just a tick mark on the order box and your JL can be beefed and customized before you even pick it up. And if you are a do-it-yourself kind of person, you can simply buy these parts and start wrenching. It’s how Jeeps are made, and either way works out to your advantage.