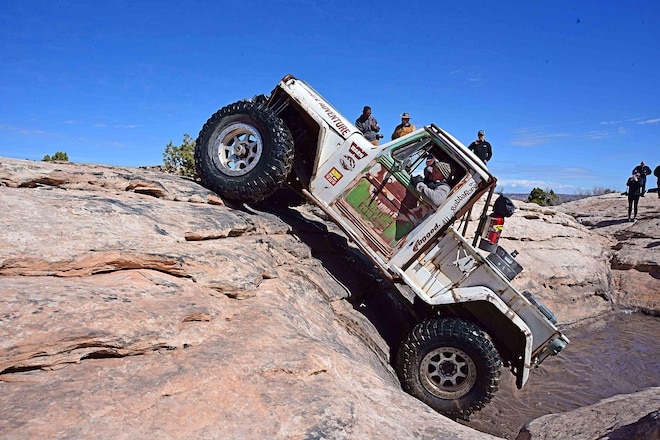 It was day two…or day three of EJS (it’s all a blur) and a group of us gathered to run the trail known as Mashed Potato with Skyjacker Suspension. Mashed Potato isn’t a terribly difficult trail, but it does have a couple of harder obstacles. One of which I figuratively left about $1,500-$2,000 in the bottom of. That obstacle is called the Gravy Bowl, and I had some fun in the hole at the expense of the engine in my 1949 Willys Pickup known as Wicked Willys. I was playing in the Gravy Bowl and it seems the 505ci Dodge/Chrysler RB big-block was a little low on oil, or had a blocked oil passage, or who knows what, but seems to have spun a bearing. As usual, the big engine ran like a champ and pulled the big Jeep out of the hole, but the end was near. What started as a tick after the climb turned into a knock, and we shut her down before a window was opened in the block. Is it fixable? I think so, and at this time so does my engine guy, but only time will tell. Check out the images from the trail, video of the climb, and pics from inside the engine once I got home.

This is me entering the Gravy Bowl for the ill-fated run. My plan was to drive into the hole, dry off my tires, and climb out. It worked perfectly, except the engine was a little low on oil and has a mid-sump oil pan…or maybe an oil passage got blocked. Either way it’s not good.
Getting things lined up. I then spun the tires at 2,000-3,500 rpm to dry the tires. I couldn’t hear the engine making the telltale oil starvation noises over the exhaust. Dumb. When I drove out of the hole I could hear the ticking, and the damage was started if not done. Super dumb.
Once back home and off the trailer I used another Jeep to push the Willys into my shop for diagnosis. At this point I was thinking it was bad, but wasn’t sure if a piston had come apart, if I’d dropped a valve, or if a pushrod was bent.
I first pulled the valve covers and confirmed that a pushrod wasn’t bent by spinning the pushrods with the valves closed. They all spun just fine.
Next I pulled the spark plugs to check for physical damage and also to make the engine easier to turn over manually. All the spark plugs looked fine. This is all speaking to damage in the rotating assembly.
Then I drained the engine oil and found a ton of bearing material on the magnet on the drain plug. Next step was to pull the oil pan, and inside I found lots more bearing material. With any luck I didn’t hurt the crankshaft, but I probably did. Dumb. Oh well, I’m over it and really glad I didn’t shoot a rod through the block, and I learned a valuable (or is it expensive?) lesson. It’s only money I suppose.
PhotosView Slideshow