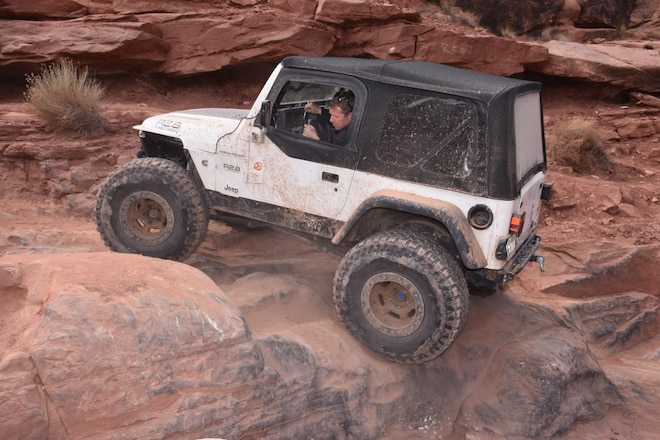 Every year we try to keep our eyes peeled for trail damage to just about any 4x4 rig, and then we follow along as trail repairs are made. Why? Seeing what broke on others rigs and how they fixed it is a great way to get an idea of how to fix your rig when things go every which way but as planned. Plus, it’s fun to try to figure out what’s wrong and what’s the best way to make it right. Sometimes a fix comes with a few parts from the well-stocked parts stores, and sometimes a fix comes with a little help from friends. But either way, for us part of what makes off-roading fun is the fact that parts are going to wear out and fail, leaving you to figure out how to get your 4x4 back together well enough to make it off the trail and get ready for the next run. Easter Jeep Safari in Moab, Utah, is always a great place to push the limits of your 4x4. Failures can occur on the first day, the last day, and anytime in between. For us, the closer to the beginning of the event, the more urgent it is to fix the problem so we can keep on having fun for the week. Here’s what we stumbled across this year.

Flex Joint
Our pal and former editor-in-chief Fred Williams, now host of Dirt Every Day, likes to wheel his Jeep, Tube Sock. So it was no surprise when we bumped into him out on the trail in Moab. Almost everything was perfect, but a new clunk under the Jeep made him take a look under the well-built TJ. At fault was a rebuildable flex joint that had popped apart under load. This happens sometimes. The good news is usually all the parts stay on the vehicle and the joint just needs to be reassembled.

We caught Fred Williams on his back in the parking lot of a hotel in Moab after he’d already pulled the end of the control arm and took the joint apart. Here are the parts. The big washer presses on two polyurethane cups that hold a pivot ball. The snap ring sometimes pops out of its groove, and the joint will then be loose and sloppy.
The best way to reassemble a joint like this is in a shop with a lift and a press. We didn’t have any of that, so it was time to improvise. Williams will use this piece of 3/8-inch threaded rod, several washers, nuts, and a socket or two.
Two great big sockets on each side fit over the center pivot. The socket on the outside has to be big enough to clear the center pivot yet small enough to fit the snap ring around the outside. Washers compensate for the 1/2-inch-drive holes on the big sockets.
Then a 3/8-inch nut tightens the whole assembly. The washer compresses the polyurethane cups until the snap ring groove is visible and the snap ring can be reinstalled.
We think Williams already knew how to use snap ring pliers, but either way he figured it out.
With the snap ring in place, he removed the threaded rod, washers, and sockets.
A big hammer and a pry bar help get things back in place. Generally you can pull one control arm at a time on a four-link. On a three-link you may need a jack to support the pinion from the ground or wedge it between a crossmember to force the pinion down. Just be sure the rig won’t move and the suspension won’t change loading (so don’t let your buddy climb in and out of the rig).

Wireless Spark Plug
When our buddy Trent McGee’s 1983 CJ-7 Jeep wouldn’t start we began running through a couple of diagnostic tests while on the trail. First we checked to make sure there was fuel at the fuel rail (the Jeep has a swapped-in 1995 4.0L). There was fuel, so we started to test for spark and our enthusiasm got the best of us. The idea is to pop off a spark plug wire, insert a screwdriver, hold the screwdriver by the plastic handle, hold the metal part of the screwdriver near the engine block, and watch for an arc. Unfortunately we grabbed and yanked the spark plug without thinking and pulled the wire out of the plug boot and the metal end. Dumb. Luckily we know how to fix it just about anywhere.

Here’s the victim, and the hand of the dummy who created this problem.
The fix is to trim a little insulation off the wire and open up the metal end of the spark plug wire. We used our handy dandy pocket knife to trim back about half an inch off the wire and a multitool to open up the metal prongs. Then fold the inner wire back over the insulation and crimp the metal end back on the wire.
Here’s the reassembled wire. The boot, which you probably forgot to put on the wire before you trimmed and crimped the wire, can be a bear to get back on the wire. A trick is to reach under your rig to a greasy area and borrow some grease from a tie-rod end or driveshaft. Use a little of that grease to lube up the wire and inside of the boot for reassembly.
So with the wire repaired, the Jeep didn’t have spark. The problem ended up being a bad relay, but not before McGee decided the crank position sensor was bad. To swap it, he showed us a couple of tricks. One was to use every 3/8-inch-drive socket extension anyone within shouting distance had. The other was to hold the screws that secure the crank position sensor in the socket with a little electrical tape.