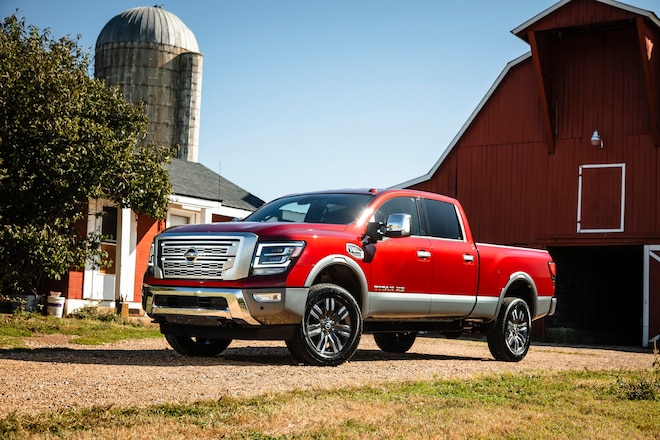 When Nissan launched the not-quite-HD XD in 2016, the company thought it had the right solution,... » Read More

The name Nissan isn’t always the first to pop to mind when it comes to capable off-road 4WD... » Read More

As the cover came off the 2020 Nissan Titan, our first thought was that this should have been... » Read More

Dark appearance packages are all the rage nowadays, and Toyota will invest more in the game with... » Read More

The midsize truck market has been red hot as of late with sales running through the roof and... » Read More

Episode 50 of The Truck Show Podcast: First-Gen Ram With A Surprise

This episode: Jonny Lieberman, the 2019 Ram HD and Power Wagon, and a response from Emme Hall.... » Read More

Episode 62 of The Truck Show Podcast: World’s Most Expensive Bronco

Episode 63 of The Truck Show Podcast: Cummins Turns One Hundred

On deck for this episode, we have Steve Sanders from Cummins Repower, a couple guys from ICON... » Read More

Listeners come out of the woodwork to tell Lightning he’s no less of a truck enthusiast with a... » Read More

Catch up on all the happenings from the 2019 Easter Jeep Safari in Moab, Utah!... » Read More

Episode 61 of The Truck Show Podcast: Exclusive! The Truck No One Saw Coming!

Thanks to an unnamed outlet breaking an embargo, we decided to open up and share what we know.... » Read More

Episode 60 of The Truck Show Podcast: Upcoming Ram TRX in the Wild

In this episode, we have CMO of Wheel Pros Scott Cobett, Jesse McGinness from Watch This... » Read More

Episode 59 of The Truck Show Podcast: The Case For Portal Axles

Roco4x4 builds Jeeps for their customers, but owner Ricardo Olavarrieta wanted to showcase they... » Read More

Plus a Former NFL Star Sells it All for Freedom, Truck News From NTEA, and The Truck Show is One... » Read More

Nissan is a well-known Japanese auto manufacturer that has brought innovative designs and technology to the American auto industry. From stylish sports cars and reliable sedans to powerful trucks and fiercely eco-friendly alternative fuel vehicles, Nissan continues to be a powerful force in today's market.

The Nissan Motor Co., Ltd. officially began in 1934 in Japan. Following the examples set forth in the United States, Nissan pioneered the assembly system in Japan for producing automobiles. As with most car manufacturers, Nissan stopped production during World War II and didn't start back up again until 1945. In the late 50s Nissan broke into the U.S. market and has been a formidable competitor ever since.

Nissan is not best known for its trucks; however it has released many trucks over the years under both the Nissan and the Datsun monikers. Most recently Nissan is enjoying success with its compact Frontier and full-size Titan.

With an impressive warranty on new models and a great reputation for reliability, Nissan is a highly-regarded brand.

Nissan broke into the American market in 1959 with the Datsun-branded pickup truck. It had a small 37-hp 1000-cc engine, but it was enough to establish itself in the U.S. truck market.

By 1977 Nissan released its first extended cab pickup, the King Cab. Throughout the years the Nissan and Datsun brand tried to customize their style and features to appeal to American buyers. Today it boasts a midsize and full-size truck offering, the Frontier and the Titan respectively.

Nissan has been an innovator and leader in the auto industry. Current safety features include Nissan's brake override technology. This brake override system is activated when the accelerator and the brake pedal are depressed simultaneously during an emergency situation. The engine throttle is automatically decreased which helps to bring the vehicle to a complete stop.

The Frontier and the Titan also have Nissan's Utili-track Channel System which provides heavy-duty tiedowns making it easy to lockdown cargo in the truckbed. And in the cabin, available Rockford-Fosgate audio system features two six-inch subwoofers, and SiriusXM satellite radio.

And while Nissan has not yet released an electric truck, it is a leader in alternative fuel options with other electric vehicles. In 1991 it received its first environmental award from the Environmental Protection Agency for its work on the Future Electric Vehicle concept car.

Nissan has released many trucks throughout the years, first only in Japan. Nissan's first truck, Model 80, was seen in 1937. The Truck Model 180, a much larger version, was released in 1941. The first post-war truck was the Datsun Truck Model 2124 which featured a softer, more consumer appealing look and a short bed. The 1947 version of the Tama Truck Model EOT47 also had a short bed.

Nissan first began exporting passenger cars to the United States in 1958 and sells its first pickup truck under the Datsun brand in the U.S. in 1959. This well-made quarter-ton pickup firmly established Datsun in the American market.

In 1977 Nissan introduced the King Cab, its first extended cab pickup. With this new truck model, Nissan begins to cement itself in the work truck category. Nissan continues to grow and improve its truck lineup, and then in 1999 it introduces the Frontier Crew Cab which is the first compact truck with four full-sized doors. It has two engine options, the 2.5-liter, four-cylinder engine, or the 4.0-liter, DOHC V-6 that produces 261 hp and 281 lb-ft of torque. The larger engine is available on the Crew Cab model. In 2005 the all-new Frontier is named the most powerful V-6 truck in its class.

Nissan's latest truck lineup also includes the full-size Nissan Titan. The Titan has four doors and seats five or six, depending on the model. The 5.6-liter, Endurance V-8 engine delivers 317 horsepower and 385 lb-ft of torque. This huge powerhouse tows up to 9500 lbs. and provides plenty of power to get any job done.