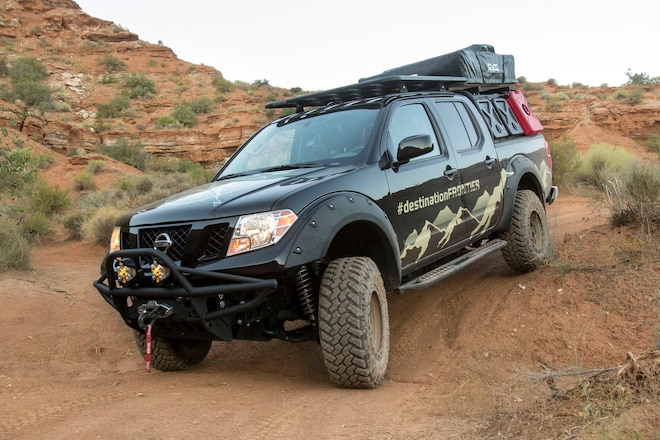 Episode 28 of The Truck Show Podcast: Racing a Raptor

This 2005 Nissan Frontier Doesn’t Just Hang With the Toyotas, It Smokes Them

When Was The Last Time You Saw a Nissan Frontier on The Trail?

Nissan Confirms Next-Gen Frontier Will Be Produced at Canton Plant

Nissan is committing to produce the next-generation Frontier midsize pickup at the same Canton,... » Read More

The Magma Mine - Miner’s Revenge Trail

Originally named the Silver Queen Mine when founded in Superior in 1875, it is now called the... » Read More

The trip begins in the Piedmont Plateau region of Georgia just east of Atlanta. We set our... » Read More

Is a Cummins-Powered Frontier in the Future?... » Read More

On the Trail of a Built Nissan... » Read More

Each year the staff of Four Wheeler picks our 10 Best Buys in Four-Wheel Drive, typically the... » Read More

A long-travel Frontier with a unique rear suspension.... » Read More

Torque Arm To The Rescue

The Nissan Frontier is a two or four-door pickup truck in production from 1997 to the present starting with the 1998 model year. Its predecessor was the Nissan Hardbody truck and this was one of the first hardbody trucks on the market. Nissan's hardbody style was introduced to North America with its Frontier models. Though first available in Japan (Nissan is an automaker based out of Japan), the Frontier has since been discontinued there and today is only sold in the Americas and is manufactured at the Smyrna, Tennessee Nissan factory. Original models were classified as compact pickup trucks. Today the Frontier ranges from midsize to large pickup trucks.

Known elsewhere as the Nissan Navara, the Nissan Frontier replaced the long-lived Nissan Hardbody in 1998. The Frontier was newly designed in the traditional truck body style with two doors and four doors added later.

The first generation models included those from the 1998 through the 2004 model years. The 1998 and the 1999 models were two-door only and four-door crew cabs were added in 2000. The 2001 models received a significant exterior redesign as well with body-colored bumpers, new griller, and logo area in the front, and overall larger dimensions. For a number of years during this time the Frontier enjoyed high sales compared to many of its competitors, and Nissan offered a wide range of power options from more fuel efficient 2.4-liter four-cylinder models, to large 3.3-liter V6 models, and several Diesel models all with four-cylinder engines. These could be fitted with a four speed automatic or a four or five-speed manual transmission. Other options included long beds, crew cabs, king cabs, and regular cabs. There were two-wheel and four-wheel drive options available.

The second generation models received a wide range of significant modifications to the exterior, the power plant, and the interior. These include the 2005 through the 2012 models with 2013 models to be announced. Nissan still offers either two or four-wheel drive. Engines include 2.5-liter four-cylinder models, a four-liter V6, and a three-liter, V-6 Turbodiesel. These are fitted with a five-speed automatic or a five or six-speed manual transmission. The compact body style was upgraded to a midsize and though the list of body style options is not as long as the previous generation Nissan still offers regular, crew, and king cabs as well as long beds. During this time the biggest changes were for the 2010 model year, this is when the turbodiesel model was added and it included redesigns to the front of the vehicle. The Nissan Frontier continued to enjoy good sales the first couple of years of the second generation models, but these began to taper off until 2012 when less than 30,000 units were sold. Production was in the hundreds of thousands. Despite initial doubts Nissan has continued production it is rumored. Details of 2013 models are not available from the manufacturer at this point though some features have been published by third part sources...

The Nissan Frontier is known for its dependability and affordability, with many original models still on the road and prices often thousands below competing models. Later models have become more expensive and today pricing is more comparable with other midsize trucks, but it has maintained its reputation as being a dependable vehicle. The first generation Nissan Frontier models were not highly rated on their appearance but later modes received better reviews in this regard, starting with the second generation changes.

In the power department Nissan Frontier is toward the middle of the pack with many options from makers like Chevrolet, GMC, and Ford boasting greater horsepower and torque, even within the compact to midsize classification. Generally the Frontier is priced below more powerful models however and it is known to perform well in the areas of towing capacity and off-road handling.

Recent Frontier models have been the recipients of several awards and notable accommodations including the 2011 highest rating from the IIHS for front, side and roof strength, 2011 Edmunds.com Top Recommended Compact Truck, 2010 U.S. NHTSA highest side-impact safety rating, and 2010 J.D. Power and Associates Highest Ranked Midsize Pickup in Initial Quality Award.

The 2012 Nissan Frontier comes with a more fuel efficient 152-hp 2.5-liter four-cylinder or a large and powerful 261-hp four-liter V-6. The V-6 model is rated for 6500 pounds towing capacity. Models get a five or six-speed manual transmission or a five-speed automatic transmission. 4x2 and 4x4 versions are available across the lineup and body styles include king and crew cabs with regular or extended bed styles. Trim levels include the S, SV, Pro-4X, and the SL ranging from the most basic to higher trim and power levels respectively. Prices range from under 20k through low to mid 30k range and competitors in the price range include the Chevrolet Colorado, GMC Canyon, and the Honda Ridgeline.

The Nissan Frontier has gone from a small utilitarian compact pickup to a relatively powerful midsize. It has come to be considered one of the more attractive trucks available but does not vary greatly in styling from most trucks within its class.