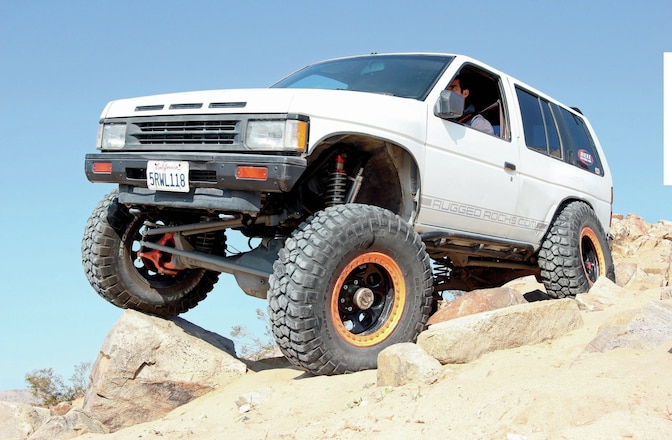 1990 Nissan Pathfinder - All Grown Up

1990 Nissan Pathfinder - All Grown Up

You see, the Pathfinder you’re looking at here is the same rig his parents purchased all those... » Read More

It takes a standout vehicle to become a feature truck. While it’s true building an off-road... » Read More

Steven’s Pathfinder is the rig that gave rise to Rugged Rocks. Purchased new by his parents,... » Read More

Part I: In The Footsteps Of Kit Carson And John C. Fremont... » Read More

WEB EXCLUSIVE!! We do a straight-axle conversion on a '90 Pathfinder.... » Read More

The newest evolution of Nissan's Pathfinder brings the company's midsize SUV more into the... » Read More

1992 Nissan Pathfinder - Completely Different - And Now For Something

Get the scoop on all the off-road truck news including increased the driving range of compressed... » Read More

Finding pathways out of the city has never been easier... » Read More

The Nissan Pathfinder was original Nissan's only SUV model, first introduced in 1985. It was later re-categorized as a crossover as the Armada inherited Nissan's SUV role. The Armada, now Nissan's full-size SUV, was originally a larger and more luxurious trim level within the Pathfinder lineup. From 1985 through 1995 it was a two or four-door compact SUV with a front engine, rear or four-wheel drive layout, from 1996 through 2004 it was a four-door midsize SUV with the same layout, 2005 through 20012 models received a redesign on the exterior and several upgrades to the power train and the interior but remained Nissan's midsize four-door SUV, and in 2013 it was completely redesigned as a crossover as trim levels were added to the Armada SUV models which to fit into the midsize SUV niche.

Like many of the early SUVs the Pathfinder was based on a purely off-road model, in this case the Nissan Bushmaster, and it was converted for "suburban" use. The first generation models included those for the model years 1986 through 1995. These had a boxy exterior typical for the time; flat extend front, cubical body, slight slope to the rear. These were two door models first with four-door versions added to the lineup later within the generation. Nissan gave drivers a wide range of power options from 2.4-liter 106-hp to a 153-hp three-liter with half a dozen models in between plus a couple of turbodiesel models. Drivers had the option of two or four-wheel drive from the beginning. For 1986 and 1987 the automatic was a three-speed and later this was replaced by a four-speed automatic. All manuals were five-speed.

By the second generation the two-door models were dropped and all Pathfinders came with four-doors and were in the midsize SUV category. Models had a front engine rear or four-wheel drive layout. It came with a 3.3-liter 168-hp V-6 engine or a 3.5-liter 250-hp V-6. Also available were a 2.7, 3.0, and 3.2 liter turbodiesel. These had a four-speed automatic or a five-speed manual transmission similar to later models from the first generation of Pathfinders.

From 2005 through 2012 the pathfinder got bigger with a bigger engine. Still on the front engine rear or four-wheel drive layout the upper trim models got a 310-hp, V-6 turbodiesel and models lower on the Pathfinder totem pole got a four-liter, 266-hp V-6 and fuel efficient 2.5-liter, four-cylinder, turbodiesel rated at 190-hp. All American models came with a five or seven-speed automatic transmission. In Europe and Asia a six-speed manual was available.

The 2013 models received the most significant remake, completely abandoning their SUV roots (nearly) to fill a new crossover slot in the Nissan lineup. Replacing the Pathfinder's spot as the midsize SUV, additional trims were added to Nissan's larger SUV models, the Armada. Four-wheel drive is still an option but the rear-wheel drive has been replaced with front wheel drive. It now uses a CVT transmission exclusively and it gets a 3.5-liter, 26-hp, V-6 engine.

The Nissan Pathfinder has been noted for its descent power within its category, its affordability, and its dependability. Many original models are still on the road. Later models become noted for their exterior style as well. The switch to a crossover with the 2013 lineup marks its biggest change and may seem an unusual step for a relatively popular model. This switch included some major changes in under the hood; a new engine and a new front-wheel or four-wheel drive setup (previously it was rear or four-wheel drive). In addition it is no long a body-on-frame platform and Nissan only offers a CVT transmission. From the outside however the Pathfinder looks quite similar to 2011 and 2012 models, losing only a little mass and a bit of height to better fit the crossover profile, but with very similar exterior style cues, from the headlights to the panels, as previous Pathfinders and even the Armada series.

One of the oldest SUV lines on the market, the Pathfinder went through the familiar evolution of two-door outdoorsy utility to models geared toward a combination of urban and limited off-road use. This included a gradual increase in power until the Armada line (originally a Pathfinder trim level) was introduced as the large and powerful SUV and Pathfinder filled the midsize role. 2013 marked the end of the Pathfinder SUV and the beginning of the Pathfinder crossover with a CVT transmission, front-wheel drive replacing rear-wheel drive (along with a four-wheel drive option), and slightly smaller exterior dimensions.