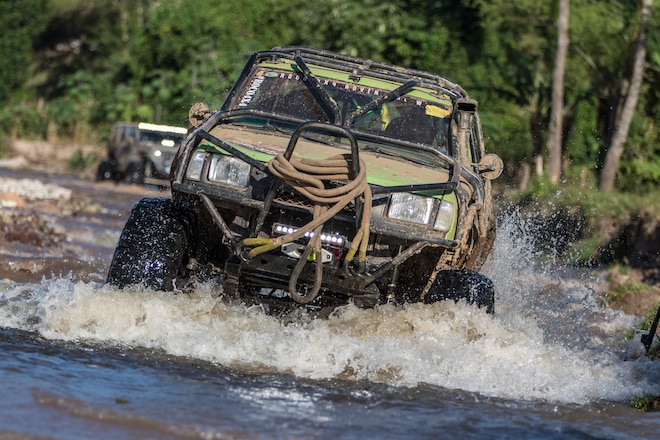 Roco4x4 builds Jeeps for their customers, but owner Ricardo Olavarrieta wanted to showcase they... » Read More

Answers to all your 4x4 tech questions

Winters are hard on the Lone Writer, and the 2013 season came in like a buffalo stampede,... » Read More

Getting to the Wolverine Petrified Forest from Boulder, Utah, begins with a very scenic drive... » Read More

Calmini is a one-stop source for those who own Nissan and Suzuki 4x4s. From mechanical parts to... » Read More

Traveling On The Oregon Trail

Hole In The Rock Trail

Making your desktop cooler, one off-road rig at a time... » Read More

Making your desktop cooler, one off-road rig at a time... » Read More

The Nissan Xterra is a compact SUV first introduced in North America in 2000. It has a four door SUV body style with a front-engine, rear-wheel drive, or four-wheel drive layout. It is based on the Frontier and named after the XTERRA off-road triathlon series sponsored by Nissan until 2006. The Xterra is built to be a capable off-road compact SUV and reflects this in the design and in the engineering. It is considered an entry level SUV in pricing as Nissan's most affordable SUV and priced lower than other crossover models within their lineup.

When introduced in 2000 the Nissan Xterra was the first SUV from Nissan in North America, but European and Asian models preceded; the Terrano and the Mistral respectively. These varied in design and with two doors and a smaller frame.

The first generation Xterra included the models built from 2000 through 2004. The 2000 and 2001 models offered two trim levels, the XE and the luxury SE. The base XE had a 143-hp engine with a five-speed manual transmission and different options included a 170-hp, 3.3-liter V-6 with a four-speed automatic or a five-speed manual. The SE version included all of the standard features of the XE plus additions like a flip-up sunroof. The models build from 2002 through 2004 received minor redesigns and a slight increase in horsepower, up to 180-hp on the 3.3-liiter V-6. Nissan still offered the five-speed manual and the four-speed automatic transmission setups. Drivers could choose in between rear-wheel drive and all-wheel drive models.

The second generation models include those built from 2005 to the present. These models are larger and based on a new platform that is shared with the Titan and the Frontier models. The biggest change was the power of the engine. Nissan gave the new Xterra models are much larger 265-hp, four-liter V-6 fitted with either a five-speed automatic transmission or a six-speed manual transmission.

The many Nissan Xterra models through the years have been best known for their excellent off-road performance within their class, as the long list of awards hints at. It is a very capable small SUV that can truly bridge the gap in between convenient urban transportation and off-road fun. It is also known for a very low starting price prior to upgrading trim levels and adding options. It is one of the most affordable vehicles within its class and perhaps one of the most capable off-road within the price range, at least during its early years and middle years of production. It is marketed and made for young and active buyers and this is evident in everything from the exterior design to the focus on minimalism and outdoors performance.

The 2013 Nissan Xterra has a four-liter V-6 engine with 261-hp and 281 lb-ft of torque. This is paired with either a six-speed manual transmission or a five-speed automatic transmission. Part-time four-wheel drive is available. Locking rear differential and limited slip differential is available. It has a double-wishbone front suspension and a multileaf solid rear axle. Safety features include front, side curtain and side-impact airbags, electronic stability, antilock disc brakes, electronic brake force distribution.

New models only received minor changes to the exterior including new headlights on the PRO-4X, outside temperature display, and a backup camera. Sixteen-inch wheels come standard and a roof-mounted gear basket and roof-mounted off-road lights are optional.

The Nissan Xterra was first introduced in 2000 as a small off-road SUV that could as conveniently navigate an urban setting, and it has remained much the same in that time and through its two generations. The biggest changes to the Xterra models cam in between the 2004 and 2005 model years when it received a significant overhaul, adding nearly 100-hp to all models and a larger exterior. Changes to recent models have been minimal but include slight increases in power in some models and additional technologies made available like Bluetooth connectivity, navigation, and backup cameras.