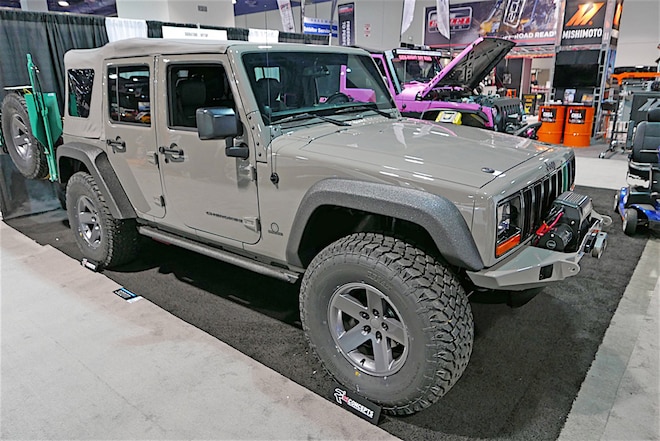 Named Pathkiller, the blended Jeep built by Greg Henderson is part 2014 JK Wrangler Unlimited Rubicon and part 2001 Jeep XJ Cherokee. The rig is named for the man generally regarded as the last chief of the Cherokee Nation, Chief Pathkiller, who fought in the Revolutionary War for Britain, and in the wars against early American frontiersman from 1783 to 1794. Pathkiller was also a colonel under Andrew Jackson in the Tennessee militia during the Creek War.

The Jeep features an interior upgraded by custom upholstered Roadwire seats, and a set of customized TrekBox sliding storage boxes in the rear compartment. The rear of the rig features a custom-made swinging tire carrier designed by Greg Henderson, and a 9500-pound capacity Quadratec winch sits on the nose. A BDS suspension, TeraFlex shocks, Omix-ADA wheels, and Pit Bull tires made up the undercarriage augmentation. A RIPP supercharger pumps up the 3.6L V-6 Pentastar engine. A myTop soft top covers the passenger/cargo compartment to keep it weatherproof.

However, the real beauty of this Jeep JK/XJ is the bodywork. Henderson spent many hours perfectly blending the nose of a 2001 Jeep XJ Cherokee on to the cabin of a 2014 Jeep JK Unlimited Rubicon. Photographs don’t do justice to the superior handiwork that Greg Henderson performed to seamlessly join these two pieces together, and it’s all metalwork–not a teaspoon of bondo was used during the creation of Pathkiller. Stay tuned to Jp Magazine for a full and much more detailed feature in the very near future.