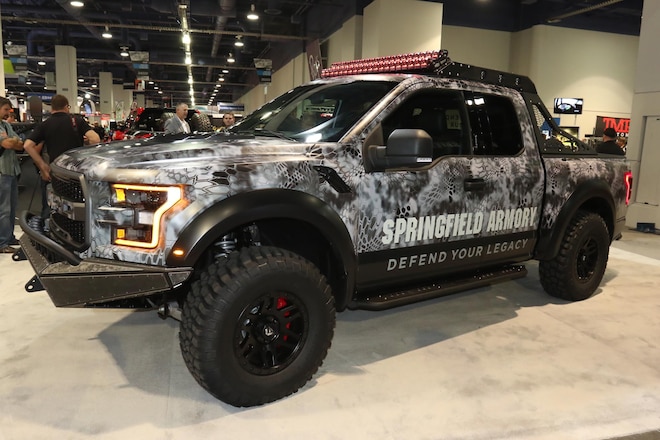 The 2017 Ford F-150 Raptor isn’t even in showrooms yet. However that didn’t stop custom bumper and truck accessory maker Addictive Desert Designs (ADD) from getting hold of Ford’s latest and hottest truck, and outfitting it for specialty arms company Springfield Armory. The truck is a showcase for the company’s new AR-platform rifle. The snakeskin-pattern wrap is just the beginning. Among the items on the truck are ADD’s new Honey Badger chase rack, front and rear bumpers featuring AR 500 armor panels, rock slider side steps, BF Goodrich M/T tires on Fuel wheels, and Alcon brakes.

Although the Raptor comes from the factory with Fox remote-reservoir shocks, that didn’t stop ADD from upgrading them with Fox’s next-level dampers. The suspension also got new rear bump stops. On the inside, the truck features three of Springfield Armory’s “Saint” tactical rifles, an M1A sniper rifle, and pistols. The interior also features pistol holsters under the steering column and lockable gun storage in the center console for those that hold a concealed carry permit. The truck will also be a featured vehicle at the upcoming SHOT Show and NRA convention. If you’re an avid firearms and truck enthusiast, your dream ride has arrived.