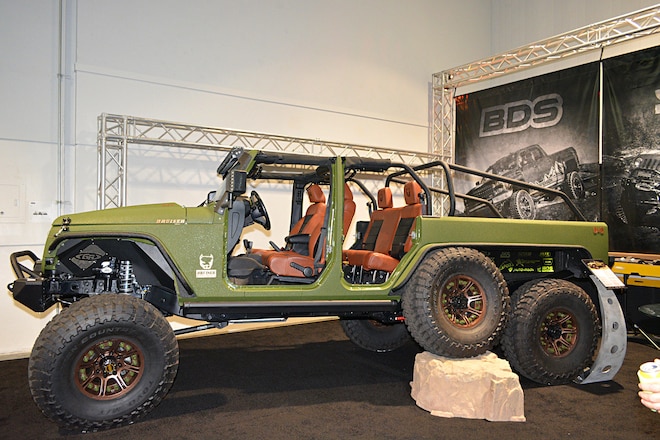 We made our annual pilgrimage to Sin City for the 2017 Specialty Equipment Market Association Show (you know it as SEMA). Were we disappointed? Only by the willingness of our feet to spend four days walking miles among the rows of exhibitors. The Las Vegas Convention Center was filled with anything and everything involving stuff that goes vroom. Here’s a peek at what we found—from show trucks and overlanders to zany Jeeps and other automotive fun and frivolity.

The specialists at Maxlider Brothers Customs paid homage to the original look of the ’66-’67 Ford Bronco by adding their own twist—a couple more doors than Ford enthusiasts are used to. Other goodies include a 5.0L Coyote engine, 37-inch BFGoodrich mud-terrain tires, and an interior intricately wrapped in marine-grade, baseball glove–toned vinyl.
Let’s talk numbers. The Earthroamer XV-HD is a luxury RV that can play off the pavement. Ford F-750 Chassis. 30,000-pound winch. 35 feet long. 13 1/2 feet tall. 2,100-watt solar system. 250 gallons of potable water. 115 gallons of diesel. 43- and 32-inch TVs. 1.5 million dollars.
Kenny Hauk wowed us again with the Super Soldier Wrangler JKU build. The aluminum body was formed by hand; the nine-slot vintage grille was milled from a 3/4-inch-thick aluminum billet; and the rollcage and control arms were crafted from aluminum hex bars. We wonder if the SEMA 2017 Best Jeep Build award was forged from aluminum too?
A quick peek at the VICCI Porsche Safari 4 from Kelly-Moss Road and Race had us wondering—is this 911 more off-road capable than some of the towering show trucks lining the streets of SEMA?
Bets were taken on whether this driveline would successfully propel the vehicle to which it was bolted. Bonus points were awarded for the exciting paintjob as well.
Some of us here at Four Wheeler grew up ogling this beast in books and magazines. Bob Chandler even came out to the show for a rare autograph session. Fans who wanted a Bigfoot truck of their own entered a raffle for a 1/10-scale RC version of the legendary car-crusher.
Roamr brought a Jeep Gladiator to SEMA loaded out with 40-inch tires, a fresh paintjob, and enough overlanding gear to satisfy your craving for month-long trips into the backcountry.
We found a couple flavors of Chevy Colorado ZR2—this one was built in conjunction with American Expedition Vehicles. The concept truck shows how (relatively) simple it is to stuff 35-inch tires, skidplates, and an expedition rack into the ZR2 platform.
This truck was built to do truck things. The Duke is a blend of a single-cab ’72 C50 work truck and the bed of a C20 pickup bed, making the final product a four-door brute carrying the K50 badge. A 5.9L Cummins 6BT makes the Duke roar while a NV4500 manual tranny and NP205 transfer case send the power to the 40-inch Nitto Trail Grapplers. The inside is just as nifty as the outside, with a custom steel dash, original gauges, and a yellow/black/plaid color scheme on the seats and doors.
We found this creation from Rezvani lurking outside the halls. If what you look for in an off-road rig includes resistance to armor-piercing ammunition, FLIR thermal night vision, and a price tag north of $200,000, then the Tank is for you! We still think it looks like an angry FJ Cruiser.
When this rig isn’t parked on display at SEMA, we’re sure it’s used for huntin’, fishin’, and lovin’ every day—since Luke Bryan was the head designer. The ’18 Suburban concept features rear-facing passenger seats in the third row, six-piston Brembo brakes for supreme stopping power, and a Thule roof rack for lugging around all that huntin’ and fishin’ gear.
Think how far two extra wheels could get you on the trail! The 6x6 Bruiser Conversions JKU rolls on a Dana 60 front axle and two custom 9-inch locked axles in the rear, all three differentials locked with Detroit lockers. Other goodies include the 480hp 6.2L LS3 engine, front and rear Warn winches, and custom inlaid wood panels in the bed.
The folks at BDS Suspension turned what might have been a standard-duty F-250 and hit it with a healthy serving of coolness. The snazzy Night Orange paint from PPG catches your eye as Project SD126 lumbers by, rolling on 42-inch BFGoodrich KR2 tires and 20x11 Stazworks two-piece wheels.
Meet the Synergy JK Commando—a delightfully retro Jeepster Commando body built on a modern JKU frame. Beneath the body lies a 6.0L LQ4 V-8 engine, Atlas transfer case, the Synergy MFG Stage 3 Suspension System with Fox 2.5-inch internal bypass shocks, and 35x12.50/17 Nitto Ridge Grapplers wrapped around 17x8-inch wheels.
Ever wish your Ford Raptor had just one more axle and a six-figure price tag? Hennessey is answering those prayers with the VelociRaptor 6x6. Along with the two extra tires, the beastly truck can be built to your liking with a twin-turbo upgrade, Brembo brakes, custom armor, and a luxurious interior.
It’s surprising what some SEMA Show attendees will do to win an American Force remote control truck. This show-goer fit himself inside a deep-dish wheel to qualify for the grand prize.
Lightning McQueen theme on a Chevy. Need we say more?
On the list of more functional SEMA builds, this 6x6 Firewalker from Skeeter Brush Trucks is at home in the tinderbox that is the southwestern United States. Built on a Ford F-550 chassis, the truck can haul firefighters, fuel, foam, and water into the most demanding conditions.
The Offroadster. Long, low, and powered by two 3.8L Pentastar V-6 engines. Daystar tells us this rig has no air conditioning, but it does not skimp on shiny components. Can we see it go off-road please?
Five-R Trucks built this ’96 Bronco and named it “The Red Night.” The front of this rig sure had folks at SEMA talking.
We know this build is meant to turn heads at the booth, but we are still left with images in our heads of how it would fare tackling the local mud bog.
The FrankenBrute TJ flatbed was certainly eye-catching—blue paint, clean lines, meaty Pit Bull tires, and plenty of space out back to haul your toys.
Here’s a Tacoma loaded up to play outside. With a rooftop tent, bike rack, skidplates, LED lights, and a snorkel, is it possible to not have fun with this truck?