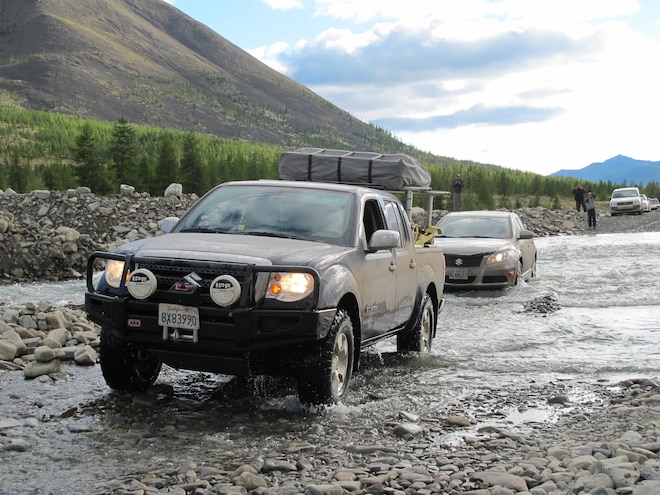 The Suzuki Equator is an affordable, midsize pickup truck designed by Suzuki. It is also known for having beaten out some of the most popular pickup trucks in the world, including the Dodge Ram and Ford F-150, to win 4x4 of the year in 2009 as awarded by Peterson's 4Wheel & Off Road magazine. Despite the fact that the Suzuki Equator is competitive and relatively affordable, it has yet to experience big sales numbers.

The Suzuki Equator was created in response to Suzuki's desire to have a midsize pickup truck in its lineup. To get one, they went to Nissan, who put together the Suzuki Equator based on its own Nissan Frontier.

Anyone wary of buying a pickup truck from Suzuki doesn't need to worry, as the Suzuki is really just a Nissan Frontier with some exterior styling changes and different badging. The 2013 Suzuki Equator is available as either an extended cab or crew cab model, with a six-foot bed standard. The crew cab model can be had in two trims, Sport and RMZ-4, as well as with a five-foot bed (five-foot bed is the only option with the RMZ-4 trim). The Extended cab model is available in three trim levels in addition to the base model, Comfort, Premium, and Sport.

The Comfort Trim provides air conditioning and CD player, while the Premium trim gives you 16-inch alloy wheels (up from 15-inch steel wheels on the base model), along with power door locks, mirrors, windows and steering, a tilt steering wheel, cruise control and keyless entry. The Sport Trim provides you with even bigger, 17-inch alloy wheels, a more muscular V-6 engine, more powerful brakes, and Hill Descent Control.

Suzuki Equator buyers can choose from two engines. The basic trim extended cab models feature a 2.5-liter, four-cylinder engine linked to a five-speed manual transmission, which generates 152 horsepower and 171 lb-ft of torque, while Equator owners who want all-wheel drive and/or a crew cab will get the 4.0-liter V-6, which puts out 261 horses and 281 lb-ft of torque, linked to a five-speed automatic transmission. The Equator is available as a rear-wheel-drive or all-wheel-drive vehicle.

The interior of the Suzuki Equator is fairly no frills with respect to comfort and materials, although there are some useful features, including GPS, Bluetooth, and satellite radio options.

The Suzuki Equator actually rides rather will for a midsize pickup, with responsive steering, a well-tuned suspension, and reliable brakes. The off-road capabilities of this truck are tough to beat, and the V-6 provides some nice power, if not as good fuel economy as the four-cylinder engine. The base model with four-cylinder engine gets 19/23 mpg city/highway, while the V-6 gets a significantly reduced 14/19 mpg city/highway.

Despite the fact that the Suzuki Equator's interior isn't likely to turn any heads or leave riders feeling like they are in the lap of luxury, this is a compact pickup truck that does what it is supposed to do. Its towing capacity is competitive with the other vehicles in its class, it handles well, it has decent power, and it is affordable.

Another area in which the Equator comes out looking quite well is with respect to safety. Safety features available on the 2013 Suzuki Equator include stability control and traction control, a four-wheel anti-lock braking system, front and rear ventilated disc brakes, electronic brake force distribution, tire pressure monitoring, and dual front side-mounted airbags, and front and rear head airbags. The Equator actually has fairly impressive safety ratings according to the International Institute of Highway Safety. Of its four tests, the frontal offset test, side impact test, roof strength test and rear crash protection/head restraint test, the Suzuki Equator scored a highest possible grade of "Good" on three, with a second highest possible rating of "Acceptable" on the rear crash protection test.

The Garmin navigation system started out only as an option for the crew cab models, but in 2010, It became an exclusive feature of the RMZ-4.

In addition, the 2009 and 2010 models featured an additional RMZ-4 sport trim, which had a combination of off-road and sport model features, like hill descent control, sunroof, and Bluetooth.