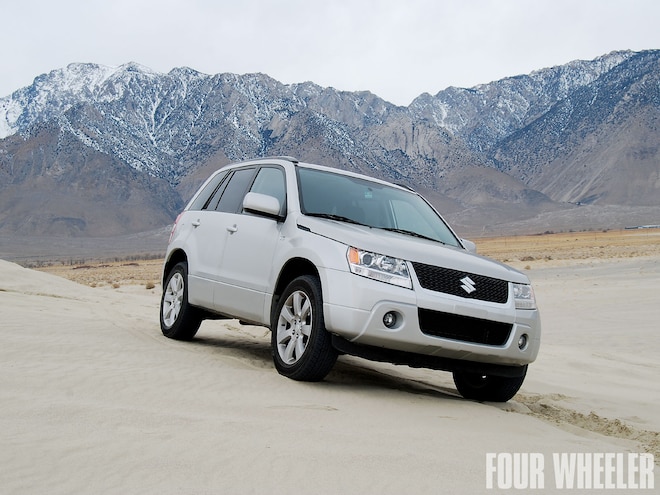 Our V-6 Suzuki Turns Into A Mileage Champ... » Read More

Our long-term GV leaves our stable this month, having proven its value-per-dollar over 13,000... » Read More

Report number 2 of 4 from our slightly bruised-but-not-yet-abused GV... » Read More

The Suzuki Grand Vitara was characterized by its foreign design, which did not inspire much confidence in the vehicle's off-road power and capabilities. Despite the unfamiliar design, it remained a solid option for those looking for an affordable vehicle with four-wheel drive, reliable engine components, and a good fuel economy.

The Suzuki Grand Vitara, known as the Sidekick in North America, has been in production since 1988. The version that was imported to North America started as a joint adventure between Suzuki and General Motors. It was designed to replace the SJ413 and Samurai, both very popular vehicles during their time. A larger version was also released, called the Suzuki Grand Vitara XL-7.

The 2013 Suzuki Grand Vitara has a stylish rounded body, like many of the SUVs seen today. The latest model offers a choice between a four-cylinder, 2.4-liter engine or 2.7-liter V-6 that produces about 60 more horsepower. The safety of the car has been improved with additional airbags throughout the vehicle, as well as standard traction control on all models. A lockable central differential and low ratio gears increase torque and the traction control during acceleration. All models also come with a four mode four-wheel-drive system that decreases fuel economy but increases traction control by forcing all wheels to grip the ground. The 2013 model also comes with the newest wheels, grille, and head lights.

The North American model, the Sidekick, became available in 1989 as a two-door convertible or hard top. The JA model came with a 1.0-liter engine that produced a mere 56 horsepower; however, the JX and JXL models offered a four-wheel-drive option and a four-cylinder, 1.6-liter engine capable of producing 80 horsepower. The JLX model was cancelled in 1990. In 1991, the Sidekick came with a four-door option, rear anti-lock brakes, and a 1.6-liter engine that produced 95 horsepower. The Sidekick was again updated in 1996 with a Sport version that featured upgraded wheels, two-tone paint, dual airbags, and a 120-horsepower, 1.8-liter engine.

The Suzuki X-90 model was released from 1996 to 1998 and was mechanically identical to the Sidekick, despite the name change. It offered a trunk, a more rounded body, and a removable roof.

The second-generation Grand Vitara offer the choice between a 1.6-liter, 2.0-liter, and 2.5-liter engine. Its exterior was updated in 2002, and again in 2004. The second generation had many different names depending on the region they were sold. For example, General Motors renamed it the Chevrolet Tracker for sales in North America and Latin America, the Chevrolet Grand Vitara for sales in Mexico, and the Grand Nomade for sales in Chile.

The Suzuki Vitara was removed from the United States market due to limited sales. However, sales remained strong in Canada, so production of all North American Vitaras was moved to Ontario, Canada. The 2005 model had a major structural redesign that converted the body to a unibody construction, integrating the chassis and body as one.

The third generation was redesigned using parts from the GM Theta Platform, which is a compact and midsize crossover SUV design scheme. The suspension was the primary component adopted from this new chassis, so the Grand Vitara's longitudinally-mounted engine was left alone for the most part. Two-wheel and four-wheel-drive option were made available, both of which rely on a wheelbase of 103.9 inches. The two-wheel-drive vehicle uses rear-wheel drive, and comes in a five-door or three-door configuration, depending on the market.