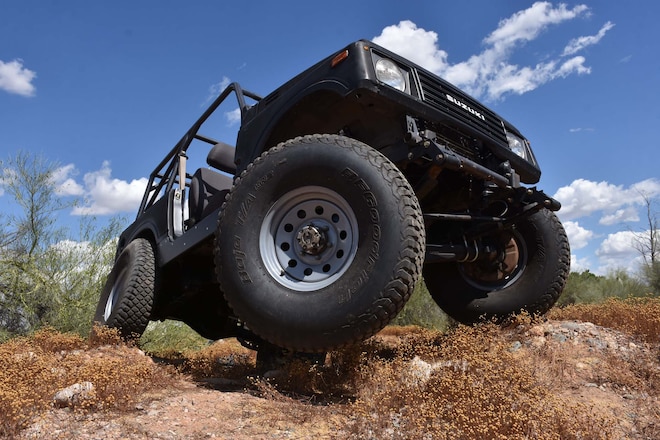 Toyota E-Locker for Our Sami

Toyota E-Locker for Our Sami

It’s hard to remember a time before Ford had the Raptor, Jeep had the Wrangler Rubicon, Chevy... » Read More

T-Case Cradle for Our Sami

We cover some of the plans we have for this 1987 Suzuki Samurai someone somewhere started... » Read More

A guide to the Suzuki Samurai and Sidekick. Learn everything you need to know before buying one... » Read More

Check out this trio of DIY mud trucks that work as well for bogging as they look.... » Read More

They call the finished product the Dung Beatle [sic], a tongue-in-cheek reference to the... » Read More

When you can’t quite get everything you need from a stock vehicle, you modify it to suit your... » Read More

This is my friend Trey at Poser Rock at Uwharrie National Forest. Not many rigs can get over... » Read More

Eric Miller Lives in Paradise and Built His Samurai to Enjoy it... » Read More

We Explore the Crown King Trail

The Worst 4x4s Ever! - Off-Road Magazine

The Suzuki Samurai is an all-wheel drive, compact, Japanese vehicle. It is also known for reaching the highest altitude of any four wheeled vehicle in history in 2007, and for Suzuki's settled lawsuit against Consumer Reports after the magazine suggested that the Samurai was overly prone to rollover.

The Suzuki Samurai is the name of Suzuki's line of compact off-road vehicles that began as the HopeStar ON360 and became the Suzuki Jimny. The Samurai's roots were laid down when Suzuki bought Hope Motor Company in 1968 with the idea of creating small off-road vehicles. This led to the first generation of these vehicles for Suzuki, the LJ10, the LJ20, the SJ10, and the SJ20, which were unveiled between 1970 and 1981. 1981 to 1998 would see the production of the SJ30, SJ40, and the SJ413, which officially carried the name Samurai. The current version, which began in 1998 and continues today, is known as the Suzuki Jimny.

The 2013 Suzuki Jimny, the successor to the Samurai, has an updated exterior, with a new grille, restyled front bumper and a redesigned hood that allows central air intake. It features a 1.3-liter engine delivering 84 horses and 81 lb-ft of torque, with a five-speed manual transmission, although an optional four-speed automatic transmission is available.

The Suzuki Jimny is not an especially responsive, fast, or quick car, and does not provide the smoothest on road ride, especially at higher speeds, however, it does have strong off-road characteristics, with its lightweight body, high ground clearance, and terrain busting all-wheel drive. The Suzuki Jimny has a simple, intuitive layout, with gauges that are easy to see and buttons that are easily accessible, although the interior does not appear as modern as it might. Head room is good on this car, which is important since the driver's seat is not height adjustable and the steering wheel does not tilt. The Jimny is small all around, with limited cargo space and not much rear seat room.

The first generation of the Suzuki Samurai was the LJ10, which was based on the HopeStar ON360 designed by Hope Motor Company, but with a new engine and body style. The idea of an able Japanese compact 4x4 caught on quickly and helped establish the Suzuki brand. The LJ10 featured a tiny 0.4-liter, two-cylinder engine which generated only 25 horsepower. In 1972, the LJ10 became the LJ20. In addition to a new grille which rotated the grill bars from horizontal to vertical, the vehicle got a new engine that bumped up the horsepower to 28 and allowed the car to reach a top speed of about 50 mph. In 1975, the SJ10 reached the market, containing a 0.5-liter, three-cylinder engine that was able to produce 33 hp. The first generation of the car ended with the SJ20, or the Jimny 8. This model featured a much more impressive 0.8-liter, four-cylinder engine that put out 41 horsepower, as well as an improved interior with updated seats and a new steering wheel. In 1981, the first generation Jimny was retired to make room for the next generation.

The next generation of Suzuki Jimny saw several new models, including the SJ30, SJ40, and SJ413. It was the SJ413 that officially took the name Suzuki Samurai. The Samurai first appeared as a 1986 model and featured a 1.3-liter, four-cylinder engine that churned out 63 horsepower. The Suzuki Samurai could be had as a hardtop or as a convertible. The lightweight nature of the Samurai and its modified suspension made this all-wheel drive vehicle one of the more popular off-roaders of the time. In 1988, a new Samurai was produced with an eye towards more on-road utility. This was achieved to some extent with a bigger anti-sway bar and a softer suspension. In 1991, a new fuel injected 1.3-liter, four-cylinder engine was offered, one that could generate 66 horsepower.

One thing to this vehicle's credit is its top notch visibility, owing in most part to its large windows. Good visibility and ability to handle tough terrain are among the biggest selling points for the Suzuki Jimny, as its on-road abilities still leave a lot to be desired.