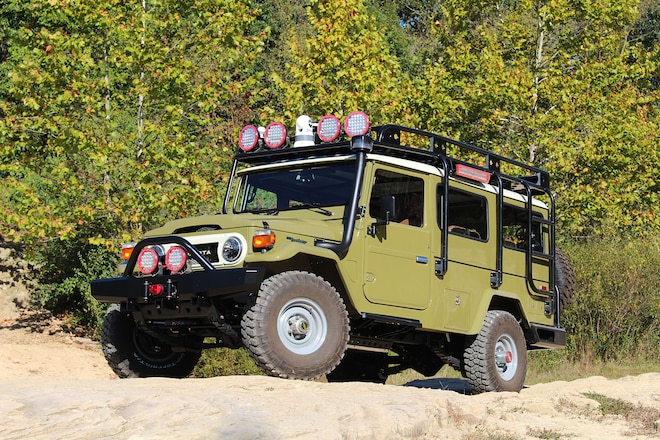 The Toyota brand is probably best known for its reliability and sustainability. Toyota is one of the largest auto manufacturers in the world and is certainly popular in the United States. While Toyota isn't necessarily known for its trucks, it has enjoyed relatively prosperous success with its truck offerings. Its most recent model, the Toyota Tundra, received Motor Trend's "Truck of the Year" in its debut year.

Toyota has deep roots in Japan, but it has only been in the United States since 1957. However, in that time Toyota has become synonymous with reliability and performance. As an industry leader in fuel economy and safety technology, Toyota has continued to release impressive cars, trucks, and sports utility vehicles (SUVs) in the U.S.

Toyota jumped into the American truck market in 1963 with the Toyota LandCruiser. It would go on to release compact and full-size pickup trucks including the T100, Toyota Tacoma, and the Toyota Tundra. With each new release, Toyota continues its commitment to excellence, quality, comfort, and industry leading technology. While die hard truck fans may still choose American-made versions, the Toyota trucks are more than a permanent structure in the United States truck market.

Toyota entered the truck market with the LandCruiser in 1963 and never looked back. This iconic model is a favorite among collectors. Toyota also received pop culture success in the 80s with its Hi-Lux which scored a role in the hit film "Back to the Future." It's hard to forget Marty's souped up truck in the film and this popularity helped to cement Toyota in America's consideration when purchasing a truck.

Today Toyota puts out some of the most powerful trucks on the market including the Toyota Tacoma and Toyota Tundra.

One of Toyota's most notable achievements may be the Prius. The Prius, easily the best-selling hybrid in America, pioneered hybrid technology. They claim to have over 1 million Prius vehicles on the road and 11 hybrid models in the U.S. which continues to represent Toyota's commitment to alternative energy. In fact, Toyota is partnering with Duke Energy to make the electric car charging process easier for the average person.

Toyota boosts $1 million spent on R&D every hour which results in some pretty impressive innovation. First, all of its vehicles are equipped with Smartstop Brake Override and the Star Safety System which includes six top-of-the-line safety features.

Available in many Toyota models is the Entune system which is a collection of popular mobile apps that can be accessed from the touch-screen. This includes Bluetooth as well as Pandora, Bing, MovieTickets.com, and even Open Table. Check stocks, traffic, weather, and more with this minicomputer right in your car.

Toyota jumped into the American truck market in 1963 with the Toyota Land Cruiser. This rugged little truck delivered 135 hp and had a boxy shape with a short bed. The LandCruiser was only available for four years and only a small number was made, which makes this model quite the sought after vehicle among collectors.

In 1964 Toyota released the Stout, followed by the Hi-Lux. Both trucks enjoyed reasonable success and set the stage for Toyota to come into its own in the America truck market. The Hi-Lux in particular was simply known as the "Toyota Pickup" and began to emerge in pop culture references. In 1983 and Xtra Cab was offered, which just made the truck more popular.

1993 came with the introduction of the Toyota T100. The T100 received mixed reviews with truck enthusiast saying it lacked in power and features, but Toyota loyalists saying it was perfect. To quiet any criticism, Toyota released the full-size Tacoma in 1995 with 4x4 packages available and a powerful V-6, 2.7-liter engine. An available 4.0-liter engine delivers 236 hp and 266 lb-ft of torque. The Tacoma represents Toyota's largest commercial success in the American truck market and is currently available as a Regular Cab, slightly larger Access Cab, or full-size Double Cab with four doors.

The Toyota Tundra was unveiled in 1999 and quickly became Motor Trend's "Truck of the Year." It has a powerful V-8 engine and greater towing capabilities, not to mention a stylish, comfortable cabin. The full-size Tundra is available in three models: CrewMax, Double Cab, and Regular Cab.

In 2007 Toyota released its second generation Tundra, showing it meant business with the most powerful engine on the market. Today the Tundra and Tacoma represent the Toyota brand well with a reputation for rugged durability, comfort, and reliability.