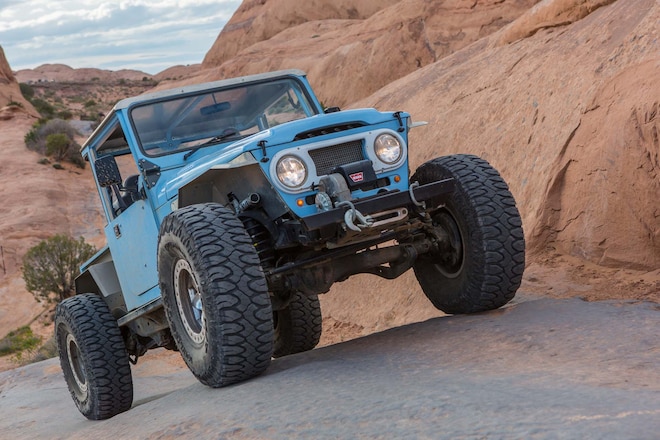 1970 Toyota Land Cruiser FJ45: Is This the Most Well Thought Out Rockcrawler Ever Built?

1970 Toyota Land Cruiser FJ45: Is This the Most Well Thought Out Rockcrawler Ever Built?

Longtime readers will likely recognize the name Brennan Metcalf. He joined us on the Ultimate... » Read More

This FJ45 pickup has been updated with a fuel injected engine and five speed transmission... » Read More

Profitt’s Resurrection Land Cruisers hits another one out of the park... » Read More

1962 Toyota FJ40 with Modern Drivability in a Patina Package

1987 BJ74 Land Cruiser Built to be Even More Unique

Third Time’s a Charm: One Man’s Quest for the Perfect Cruiser... » Read More

This numbers-matching 1981 FJ43 has been meticulously restored, thanks to the team at The FJ... » Read More

Slee imported a 79 Series Toyota cab and bed and combined it with an 80 Series chassis and a 100... » Read More

There are few off-road vehicles that are as iconic as the Toyota FJ40 Land Cruiser. It’s just... » Read More

This month we go over what went wrong, how we fixed it, and a few other upgrades to prep the big... » Read More

If mass chaos comes tomorrow, or even later today, there’s one man who is ready to bug out.... » Read More

The Toyota has been totally restored and retains many of its original components, but it has... » Read More

I have always dreamt of a Land Cruiser 80 Series as a project. These are the last of the... » Read More

The Toyota Land Cruiser has a long reputation as a great off-road vehicle, but over the years... » Read More

The Toyota Land Cruiser is the most popular four-wheel drive sport utility vehicle (SUV) Toyota has ever produced. Toyota began production of this vehicle in 1951 and it is still manufactured today. It started out as a competitor of the Jeep style vehicle but soon evolved into an off-road station wagon that can drive off-road just as well as it does on paved city streets.

During the Korean War, there was a demand by the United States and her allies for a vehicle similar to the Willys Jeep that was so effective during WWII. They developed the Jeep BJ prototype as a suitable substitute for the Jeep. The prototype was very successful because it offered a lot of horsepower, towing and hauling capability and was very reliable on the battle field. Just as the Willys-Overland Jeep, Toyota saw a demand for a civilian SUV that was highly functional and reliable. Therefore, Toyota designed and built the Land Cruiser to compete in the emerging family SUV market.

The Toyota Land Cruiser was developed to embody the functional aspects and reliability of the original Willys-Overland Jeep however the main competition came from the Land Rover. The Land Cruiser has been produced as a convertible, hardtop, station wagon, and utility truck. The different body styles and engine sizes have been mixed and matched to provide SUVs that are best suited for all terrains such as desert sand, mountain roads and city streets. They have remained hugely popular since their first year of production and it is because of their reliability and versatility.

The 2013 200 Series comes equipped with a 5.7L V-8 engine that produces 381 horsepower (hp) and 401 lb-ft of torque with a six-speed automatic transmission. It has a 112.2-inch wheelbase and a 194.9-inch total length. It has new four-wheel drive upgrades such as Downhill Assist Control, a new Multi-Terrain antilock braking system, optional rear-view camera and cruise control. Only one trim model is available but it comes with an upgrade option that adds interior and four-wheel drive accessories.

The Jeep BJ was built to be a successful and reliable alternative to the Willys-Jeep used during WWII. It used a Type B 3.4L six-cylinder, overhead valve engine that produced 84hp and 159 lb-ft of torque. Its body style was a two-door Softtop, had a wheelbase of 90 inches and lacked a low-range transfer case.

The second generation of Land Cruiser featured the same engine as before but now offered a Type F 3.9L six-cylinder that produced 99hp and used a three-speed transmission. The body style was upgraded to a look more civilian and to make for a smoother rider, longer four-plate leaf springs were added to the suspension and the engine was moved forward 4.7 inches. A station wagon model was introduced that increased the wheelbase to 104.3 inches.

The third generation received a more powerful Type F 3.9L engine that produced 125hp, low-range gearing for the transfer case and a new body style made from steel pressed sheet metal. In 1974, a 3.0L four-cylinder diesel engine was offered to boost sales in Japan. In 1975, a new Type 2F 4.2L engine replaced the 3.9L and it received new front disc brakes.

This generation of Land Cruiser was referred to as the "real" station wagon with a wheelbase of 106.3 inches and a total length of 184.1 inches. It used a 3.9L or 4.2L engine, featured four-wheel drive and a three or four-speed manual transmission.

This series is a four-door station wagon that had a 107.5-inch wheelbase and a total length of 184.1 inches. It offered a 4.0L or 4.2L gasoline, 3.4L or 4.0L diesel or a 4.0L turbo diesel engine. This model was designed to be much more civilian, offering eleven paint choices, air conditioning, rear heating, an upgraded interior and a four-speed automatic transmission.

The 70 Series was introduced as a soft-top, hard-top, utility cab-chassis or Troop Carrier. Each model came with various options of engine type and size, 13 choices in total. All models however used a five-speed manual transmission, had a total length of 196.7 inches and offered either two-wheel or four-wheel drive systems.

All North American models sold featured a full-time four-wheel drive system and option of a four-speed automatic or five-speed manual transmission. The engine choices were a 4.0L or 4.5L gasoline, 4.2L diesel or 4.2L turbo diesel. In 1992, this series received antilock brakes, larger discs and a slightly longer wheelbase. This series also manufactured many special edition models that were specific to each region they were sold in.

This series is most commonly referred to as the "Prado" and was sold mainly in Japan, Australia, and Europe. This model featured smaller engines and a smaller wheelbase.

The 100 Series replaced the 80 Series in a 100 or 105 trim. The 100 used an independent front suspension, a wider chassis and a 4.5L or 4.7L V-8 engine. The 105 trim used most of the 80 series chassis and suspension, solid axles with coiled springs, smaller engines and were sold only in Africa, Australia, Russia and South America. The 100 Series is considered durable and reliable but there have been consistent issues with the suspension and differentials.

This series comes with a choice of a 2.7L four-cylinder or 3.4L six-cylinder engine. It comes with an engine immobilizer system to prevent theft and in 2004, the small 2.7L engine was replaced with a 4.0L V-6. This model was mainly sold in South America, Australia, and Europe.

The 2013 200 Series Land Cruiser was developed to replace the 100 series. It was built on the Lexus LX 570 platform and the frame was derived from the second generation Tundra. The 200 Series has bigger brake rotors and calipers, a heavier duty suspension, new body styling and many new luxury options. It comes standard with keyless Smart Entry, ten airbags, many new four-wheel drive options. The interior comes with beige or grey leather, 14 air-bags and a premium sound system.