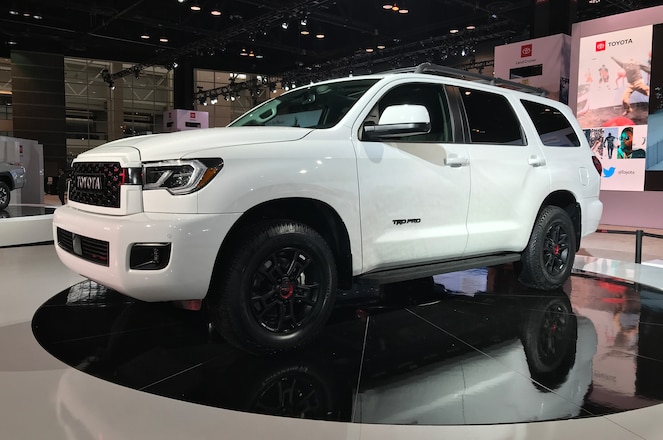 In a move we’re surprised took this long, Toyota revealed a TRD Pro variant of the 2020... » Read More

You can’t help but notice that in the last few years SUVs have become so popular that... » Read More

There was a time when Giant Sequoias were thought to be confined to the forests of California,... » Read More

The most obvious trait about the Toyota Sequoia that keeps consumers ready to buy is its incredibly versatile nature. This SUV is not only equipped with plenty of interior space, but also has hauling and towing capabilities typically only found in full-sized trucks, making it an excellent choice for towing boats or other recreational vehicles. Additionally, the off road driving capabilities of this vehicle are almost unmatched by the current generation of competing SUVs. Toyota intended the Sequoia to truly live up to the SUV name with plenty of features giving the vehicle the necessary attributes to keep up and exceed the other options.

While SUVs truly found their stride in the 1990s and 2000s, these versatile vehicles have been around for decades, most notably starting in the WWII era when automobiles such as the Jeep achieved notoriety as the ideal option for all terrain driving and transport. Naturally over the years the SUV morphed into the right choice for not only off road driving, but as family and recreational vehicles. As an innovative frontrunner in many automotive classes, Toyota didn't take long to get in on the act. This Japanese based company is well known for producing high quality SUVs and other vehicles.

In the SUV category, Toyota offered its incredibly popular Sequoia line in the 2001 model year. Since then, the full-sized SUV niched a place for itself in the highly competitive class and provided Toyota fans and SUV enthusiasts with a worthwhile choice. The Toyota Sequoia is designed to meet the needs of not only people with outdoorsy active lifestyles, but anyone in need of three rows of seating and a comfortable interior. As with all of its products, the Sequoia comes to each market year with improved features and technology intended to attract new buyers and offer a solid choice in the sport utility class.

The Toyota Sequoia exhibits diversity and versatility in action as well is some attractive styling both inside and out. While the Sequoia is certainly designed to meet the requirements of a traditional SUV, it features an attractive design intended to appeal to the vast majority of buyers. On the exterior, the Sequoia looks more like a minivan or car instead of a truck, like many of the older SUV models. Inside the cabin, comfortable three row seating and well-constructed panels are the primary focus.

Toyota decided once again to offer its impressive and popular Sequoia SUV for the 2013 model year. As part of the second generation for this vehicle, this year's model is equipped with a 4.6-liter, V-8 engine paired with a five-speed automatic transmission. This powertrain provides 310 hp and 327 lb-ft of torque. The higher trim levels, the Limited and the Platinum is equipped with a 5.7-liter, V-8 engine and is available as an option on the SR5 edition. The larger engine powertrain offers up 381 hp and 401 lb-ft of torque.

As noted, the 2013 Toyota Sequoia is available in three trim levels and different seating configurations. This SUV is capable of seating seven or eight passengers depending on the chosen option. Even the base SR5 is well equipped with features such as alloy wheels and full power accessories as well as iPod integration and Bluetooth capabilities to name a few. The Limited steps up the game with leather upholstery and an improved audio stereo system. Of course the Platinum trim level features the most comfort features with a navigation system, the option of second row captain's chairs, and 20-inch wheels.

The first generation of the Toyota Sequoia showed up on showroom floors for the 2001 model year. These SUVs were equipped with a 4.7-liter, V-8 engine teamed up with a four-speed automatic transmission. This powertrain is capable of an impressive 240 hp. Capable of seating eight passengers, the Sequoia from this generation was offered in two trim levels, the SR5 and the Limited. Of course, the Limited trim level was offered with a truly long list of standard features, but even the SR5 wasn't anything to sneeze at with its impressive features as well.

The second generation Sequoia appeared on the scene in the 2008 model year. This particular version of the Toyota Sequoia offered the same standard engine, the 4.7-liter V-8, but this time it was coupled with a five-speed automatic gearbox. In the 2010 model year, Toyota chose to amp up the power a bit with a stronger 4.6-liter, V-8 engine. Improved safety features made the cut to the second generation as well. This edition of the Sequoia is equipped with driver knee airbags in addition to the other already standard safety equipment. Technology such as Bluetooth connectivity and iPod integration also made their way into the cabin of this SUV.