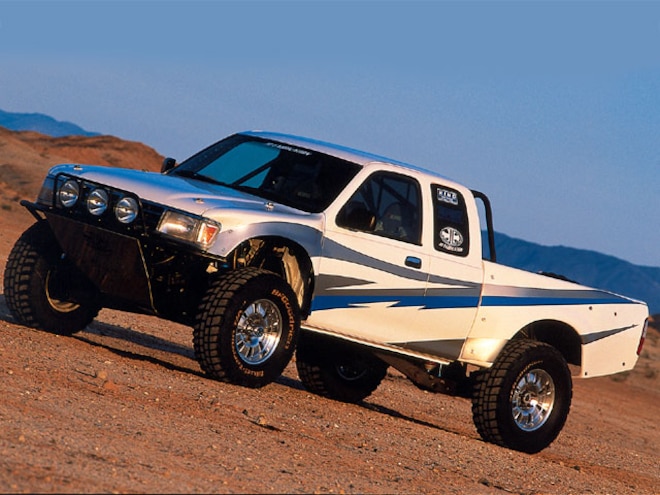 The production run of the Toyota T100 was comprised of one model of the truck that underwent very few changes throughout its lifespan. Main criticisms of the pickup were its size, the fact that its engine lacked power, and the fact that there was no extended cab version initially. Over time, these issues were addressed by Toyota, and as such, the Toyota T100 had several different engines, and eventually two cab configurations.

Although the Toyota T100 was equipped with an eight-foot bed, it was smaller than a number of other full-size trucks, and only slightly bigger than the Dodge Dakota in the midsize truck category. This gave Toyota a unique selling edge, as it was producing the only truck of this size and capacity. Unfortunately, this size difference did not work to the advantage of the company, as many criticized it for being too small.

When the Toyota T100 was initially produced, it came with only one cab configuration. The first Toyota T100 was a two-door pickup truck with a regular cab only. The only engine found in the first model of the Toyota T100 was a 3.0-liter, V-6 engine that produced 150 horsepower and 180 lb-ft of torque. While this engine provided better fuel economy for the pickup truck, it was felt by many that it lacked the power necessary for this type of vehicle.

When the Toyota T100 was in production, it had a pretty lengthy list of features compared to many of its competitors. Dual vanity mirrors, power windows and locks, cruise control, a tilt steering wheel, and an AM / FM, cassette stereo were just some of the features included. The 1994 model of the Toyota T100 included a driver's side airbag. 1997 saw the introduction of larger 16-inch rims on the Toyota T100.Three trim lines were available, which were the base model, the DX, and the SR5.

The launch of the 1995 models saw two significant changes made to the Toyota T100 to fight two of the most common complaints. Toyota added more power to the pickup truck by introducing a new 3.4-liter, V-6 engine that produced 190 horsepower and 220 lb-ft of torque. A new Xtra cab version was launched mid-model year, meaning that owners could now choose between the regular cab configuration or an extended cab version.

In 1997, the Toyota Racing Development department produced a supercharger for the 3.4-liter engine found on the Toyota T100. When the supercharger was added to the engine, there was an increase in power to 260 horsepower and 250 lb-ft to 265 lb-ft of torque. The only models that the supercharger could be added to were the 1997 and 1998 models, due to the fact that earlier Toyota T100 models had a different electrical and computer layout that did not support the addition of the supercharger.

Besides the change in engines and the addition of the extended cab configuration, very little changed on the Toyota T100. The original design stayed relatively the same over all of the model years, with the pickup sporting a relatively conservative, yet robust, style. The exterior had clean lines and a relatively simple overall design, which carried on into the interior of the cab. The maximum towing capacity of the Toyota T100 was 5200 pounds, and the pickup truck had a payload limit of 2450 pounds.