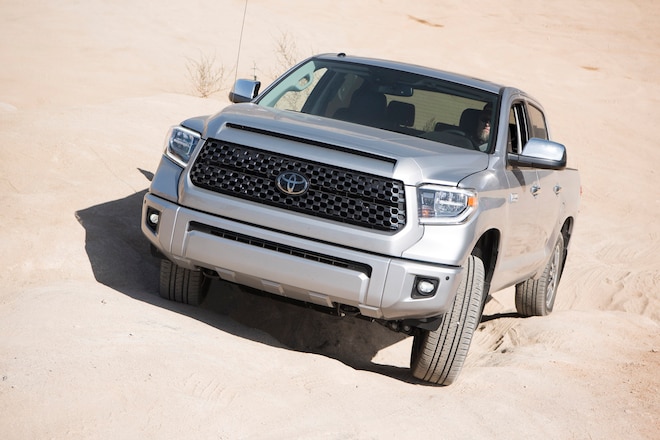 Toyota will base the next-genTacoma and Tundra on the same platform—codenamed F1—and we may... » Read More

Add Security in Minutes With a BAKFlip Tonneau Cover

Toyota has something up its sleeve for the 2018 Chicago Auto Show, and while the company won't... » Read More

“Ultimate Sportsman” Tundra Will Be Built at Show... » Read More

As someone who builds things for a living (he's a crew foreman that builds cellphone towers),... » Read More

TOTD: Which Luxury Pickup Truck Would You Choose?

2015 Pickup Of The Year - Wheeled Warriors

For the last few decades we’ve tested substantially changed or all-new trucks, all at one... » Read More

Every year we here at Petersen’s 4Wheel & Off-Road assemble as many of the new... » Read More

Now that the cat is out of the bag, you’re probably wondering whether these TRD Pro models are... » Read More

Over the course of the week, we cover an immense variety of terrain and specific challenges to... » Read More

When something's already good, there's no need to re-invent it. That's the theme behind the... » Read More

Our assignment was to evaluate the new Tundra and we spent most of our time in a 5.7L-powered,... » Read More

The Toyota Tundra is a full size pickup truck and the largest model lined from Toyota. It was introduced in 1999 and is currently still in production. It uses a front engine rear-wheel drive or four wheel drive layout and has a two-door regular cab, four-door double cab, or four-door Crewmax body style. The Toyota Tundra is known for its power and reliability. The Tundra is one of the best selling full-size trucks on the market breaking the 100,000 units sold mark several of the years it's been in production with its biggest selling year, 2007 falling just short of 200,000 units sold. The 2008 Toyota Tundra won Truckin' Magazine Truck of the Year and Motor Trend Truck of the Year. It is currently assembled in San Antonio, Texas.

The Toyota Tundra went into production in 1999 for the 2000 model year and was a whole new model for the Toyota lineup, though it shared some features with the older T100 and the Tacoma models. The main similarity was the larger V6 engine used in the more powerful models which served as the base engine for the Tundra. During the production phase Toyota used the name T150 but Ford felt this was too similar to their F150 line and the name was changed to Tundra. Though Toyota claimed they had never planned on naming T150 upon release, they countersued Lincoln for their name Lincoln LS which they said was too close to the Lexus LS. Toyota's new truck was immediately a competitor in the full size truck category with sales figures comparable to Chevrolet and Ford models in the same category. It did not begin receiving official awards however until 2007 for their 2008 models.

The first generation models included those sold from 2000 through 2007. These used a front engine rear or four-wheel drive layout and had a two-door regular cab, four-door access cab, or a four-door double cab. During this time they offered a wide range of powertrain options including a 3.4-liter V-6, four-liter V-6, and a 4.7-liter V-6 with a five or six-speed manual or a four or five-speed automatic. The body style of the Toyota Tundra was typical of full size models with flared wheel wells and Toyota's grille and logo in the front.

Second generation models include the models from 2007 through 2013. Some of the exterior changes included a lifted body similar to the smaller Tacoma which has been popular among car buyers, a flatter and larger grille, redesigned curves throughout the body and slightly larger body all around. It came with a range of advancements in the areas of comfort and technology as well as a significant power upgrade to all models. Toyota still offers a front engine rear or four-wheel drive layout. Body styles include a two-door regular cab, four-door double cab, and a four-door crew max. Engines include a four-liter V-6 and a 4.6, 4.7, and a 5.7-liter V-8. The 5.7-liter V-8 gets 381-hp. Transmission options include a either a five-speed or a six-speed automatic.

A new Toyota Tundra was introduced in February at the Chicago Auto Show and it is slated to be released for the 2014 model year. Mechanically it is nearly identical to the 2013 models at this point but will be considered the third generation of models with significant changes to the exterior including a larger grille, more defined fenders, and new lights all the way around. It also receives a number of technology upgrades including a 3.5-inch touch screen.

The Toyota Tundra is known for its rugged dependability and impressive towing capacity and is also often highly rated in terms of style. Its main competitors are the Chevrolet Silverado 1500, Ford F-150, and the GMC Sierra 1500, and Ram. Base models are priced comparably but upper tier models can run significantly more than their corresponding models.

The 2013 Toyota Tundra has three engine options; a 270-hp four-liter V-6, 310-hp 4.6-liter V-8, and a 381-hp 5.7-liter V-8. It has an impressive maximum towing capacity of 10,500 pounds. Transmissions include either a five or a six-speed automatic with overdrive and auto-manual. It gets an EPA estimated 13/17 to 16/20 mpg city highway. Safety features front, side-impact, and side curtain airbags, electronic stability, antilock brakes, and an optional backup camera. Notable features include power moonroof, standard dual-zone air, two 12-volt power outlets in the front, optional leather, and optional navigation.

Since 2000 the Tundra has been one of the more popular full size trucks sold in the United states. Models from 200-2006 remained basically the same offering a range of powerful engines and an attractive exterior body style. Models built from 2007-2013 received a modest exterior redesign as well as a boost in power and many technology advancements.